The brume abounded and I abandoned all domestic demands and entered into a quiet, parallel universe

I love new words and I’m particularly interested at the moment in weather-related terms. I confess to a grudging envy of the array of Scottish weather words: so evocative of that which they seek to describe.  I began a search for corresponding Cornish terms. 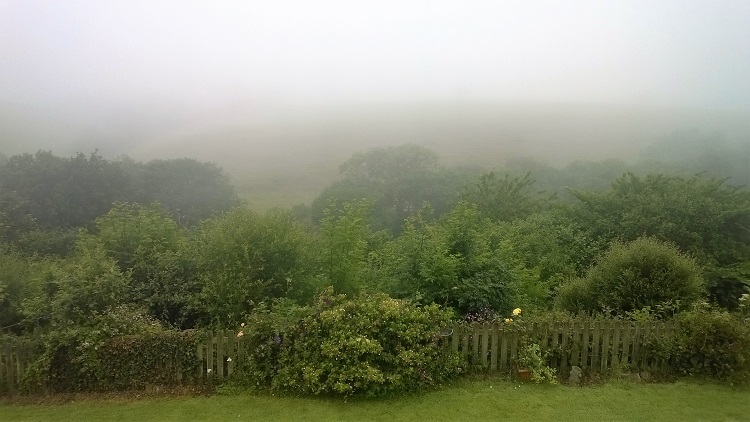 Weather Online supplied a great list of British weather words – the majority of which hail from Scotland and northern counties – but I did find ‘mizzle’ and ‘dimpsey’.  Mizzle I recognised: a dense, fine rain, similar to Scotch mist. We’ve had a lot of mizzle since arriving here.  But ‘dimpsey’ is new: very dull, wet conditions with low cloud and fine drizzle.  The difference, it would seem, between dimpsey and mizzle being the prevalence of low cloud.  It exactly describes what we’ve been enjoying this week.

Then I found that every other source I looked at has a different definition for dimpsey.  It’s still a word used in Cornwall and Devon but it’s defined as the time in the evening just before dusk.  And it’s used as a noun – akin to dusk or twilight or gloaming I suppose. So it would seem that we have not been having a series of dimpsey days.  How disappointing!

All of this was of great interest but left me where I started: scratching around for a word to describe the predominant weather conditions we’ve had so far this month.  There has been a little sunshine, I can’t suggest otherwise, but very little warmth.  There has been a lot of mizzle…. And a lot of very dull, wet conditions with low cloud and fine drizzle.  I really wanted to condense that: a series of dimpsey days sounds rather nice.  Sadly, it is not to be.

But I have found a substitute.  I have found a word that encapsulates what I wanted to say: brumous.  What a wonderful word!  Not onomatopoeic but doesn’t it sound like what I’m striving to describe?  Brumous: dull wet conditions with low cloud and fine drizzle?  If I’m honest I still haven’t got it quite right.  Brume is a nineteenth century Provençal word for ‘fog’ but it apparently derives also from the Latin: bruma, which means winter; the shortest day; the winter solstice. So strictly, brumous refers to a wintry fog. Can I therefore describe a day in July as a brumous day? In the absence of a better word (all suggestions welcome) – yes, I can; it’s the best I’ve found so far.  We have had a week of predominantly brumous weather and having a word to capture the silent grey shroud which has clothed these summer hours gives the experience substance, character and purpose.

It is this train of thought which led me to decide that to fully experience a brumous day I should not be watching from inside the house; I should be outside and immersed in the brume.  On the first morning that I made this decision I got my priorities wrong.  I did a few chores around the house beforehand, by which time the brume had dissipated: we were left with a grey day but no fog. This did not turn out to be a brumous day, merely a brumous morning.

But I made no such mistake a day or so later.  The brume abounded and I abandoned all domestic demands and entered into a quiet, parallel universe. A universe which remained with us throughout the day.  Not once did the brume threaten to lift.  And it was magical. 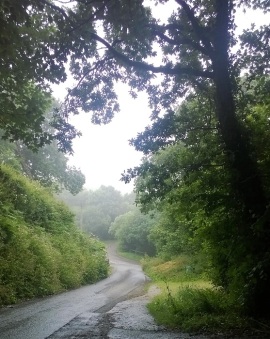 Brume in July … there are leaves on the trees and the air is warm and humid.  Overhanging branches deliver a cascade of weighty droplets as wet as a heavy rain shower, but elsewhere the air is softly damp and soundless. 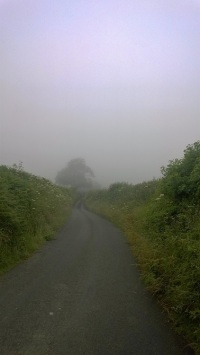 Views have vanished.  There is only the immediate path ahead. and tiny pinpricks of colour on the roadsides which catch the eye in the absence of other distraction and demand close scrutiny.  Jewels among tangles of damp grasses; the colours bright in this hushed, veiled landscape, and bedecked with watery diamonds: their fragile hold on delicate petals undisturbed in the stillness. 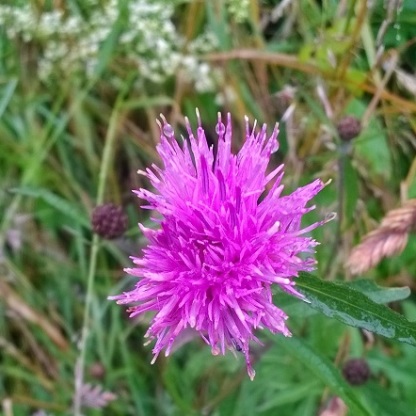 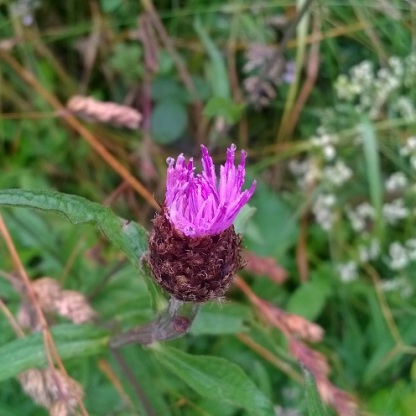 There is no world beyond this silent, patient, quiescent landscape.  I am alone in this place with just a curious cow for company.  And it is beautiful.

I wanted a poem that echoed my experience of entering into this July brume.  An American poet who is new to me offered the words that spoke most clearly.  With eloquence and succinctness he gathered in the muted sounds and colours I experienced, and packaged them into a literary photograph which speaks of what I felt as I wandered the misty lanes.  No matter that Jones describes a city, nor that he lived a troubled and difficult life.  He has seen what I have seen and felt what I have felt – and across the decades and across the continents, he has captured something universal.

The morning comes, and thickening clouds prevail,
Hanging like curtains all the horizon round,
Or overhead in heavy stillness sail;
So still is day, it seems like night profound;
Scarce by the city’s din the air is stirred,
And dull and deadened comes its every sound;
The cock’s shrill, piercing voice subdued is heard,
By the thick folds of muffling vapors drowned.
Dissolved in mists the hills and trees appear,
Their outlines lost and blended with the sky;
And well-known objects, that to all are near,
No longer seem familiar to the eye,
But with fantastic forms they mock the sight,
As when we grope amid the gloom of night. 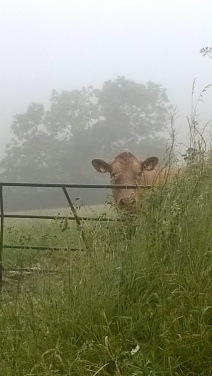