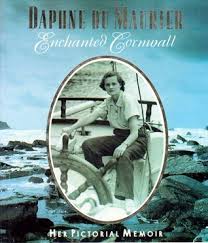 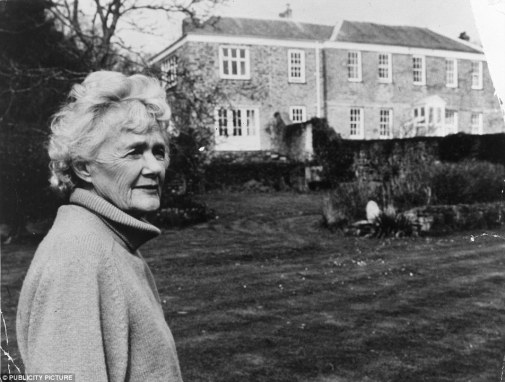 This is not the first book I read after April 1st – the date on which I have chosen to begin my Classics Club challenge.  And it barely manages to wriggle under the twenty-five-year bar which enables it to be considered a contender for the epithet of ‘classic’.  Even if it were well within that parameter it would seem to be a tough job to make a strong case for this book to sit as a classic alongside some of the other, more traditional titles on my list.  It can’t even measure up against Daphne’s own novels, for it is in large part a cornucopia of many of them, rather than a piece of work standing alone in its own right.  But I am choosing to begin with it, and I am resolute in claiming it as an absolute classic.  How fortunate that the challenge gives so much room for interpretation!

Enchanted Cornwall: her pictorial memoir, was published just a few months before Daphne’s death.  It is structured around the chronology of her life, but primarily it illustrates – through words and pictures – Daphne’s love affair with Cornwall and the inspiration behind many of her most famous books.

“Enchanted Cornwall is more than a travelogue of memorable haunts.  It tries to give an idea of the way in which Cornwall has communicated with me, and I with Cornwall, for here I found myself as a writer and as a person.”

As I read the foreword, just a few weeks after arriving here in Cornwall, I had already been utterly beguiled by the beauty and sense of timelessness that surrounded me.  So to read her experiences of when she first arrived here herself filled me with a breathless excitement: I felt as if I were stepping in Daphne’s own footsteps.  I don’t mean to suggest an aspiration to rise to her level of talent or success, but what she is able to express in this book – especially in the opening pages – captures more perfectly and eloquently than I could ever hope to emulate, what I too, felt in my first, giddy days in this place.

“In Cornwall I discovered especially a sense of timelessness barely glimpsed before.  A sense of continuity with ancient times, and more than this, a present which resonated with past and future – a sense indeed that past, present and future are not isolated milestones in time, to be feared, longed for and finally met, but that they are one, each a part of a whole, existing side-by-side.” (Foreword)

Each chapter covers a period in Daphne’s life.  Chapter one chronicles her childhood and brings her to Ferryside, where her love affair with Cornwall began.  Here she discovered who she was and her career as an author and storyteller found its rhythm and began to take off.  As each subsequent chapter moves along through the years, it ties in with the publication of a particular book – long extracts of which are reproduced within it.  This strategy worked perfectly for me.  This is not an autobiography: it is not intended to be detailed, or to analyse or dissect Daphne’s life or character.  Instead we see glimpses of how a particular idea was spawned and what it led onto.

An abandoned, rotting schooner discovered at low tide provided the figurehead, (now affixed outside what was Daphne’s bedroom at Ferryside), which became the catalyst for research on a local ship-building family, that in turn led to her first published book, “The Loving Spirit”.  Another ship, wrecked off the local coast in 1930 while Daphne lived here, became the tiny spark that eight years later ignited into “Rebecca”.  An ill-fated riding expedition on Bodmin Moor with Foy, daughter of her mentor and friend, “Q” (Sir Arthur Quiller Couch), provided the material for the atmosphere of fear and foreboding that permeates Mary Yellan’s experience on the moor in Jamaica Inn.  These examples and more are discussed in the book, accompanied by long passages from the respective novel and by atmospheric photographs.

I was absorbed and fascinated on various levels.  These glimpses into the mind of a writer so impacted by a sense of place were manna from heaven.  But more than that: I now know a number of these places for myself, and those I don’t know are little more than a stone’s throw away and can be visited whenever I choose.  I had already experienced the mystery of Cornwall.  My literal – and literary – knowledge of Cornwall was still in its infancy, but even before I opened this book I had experienced for myself that subconscious, atavistic connection with the history, the landscape, the legends, the people.  I had felt the ineffable nature of this place – and here was Daphne, putting into words and pictures what I was not yet able to articulate, even to myself.  I gobbled up this book like a box of exquisite chocolates, bubbling over with joy at each small delight.  And I was sorry when the box was finished.

The book is stronger in the earlier chapters.  Daphne explains that having agreed to do the book, she gave her thoughts to her editor, Piers Dudgeon, and he “wove the threads into this pleasing tapestry”.  Perhaps Daphne’s strength, inclination and energy wavered a little as the project proceeded and her life force waned; or perhaps they made a deliberate choice to focus more of the book on her seminal early years.

Either way, I consider it to be a gem: perfect for getting a feel of Daphne as a person and Daphne as a writer, and for gaining an understanding of how she and her work were irretrievably connected to the landscape and sense of place that she instinctively absorbed.

This book will always be a major classic for me – at the forefront of my own personal canon.  Writing in the 1980s, Italo Calvino had this to say in his essay, “Why Read the Classics”:

“Your classic author is the one you cannot feel indifferent to, who helps you define yourself in relation to him… ”

(‘your’ in Calvino’s italics, we’ll skate over the gender issues)

And crucially he states:

“There is nothing for it but for all of us to invent our own ideal libraries of classics.”

At this time in my life this book stands at the forefront of my own ideal library of classics. I make no claims with regards to how others might respond to it.  It’s a connecting strand between Daphne’s life and her work, and as her last published book I think it’s a fitting epitaph.

Cornwall defined Daphne, just as it appears that it is defining me, and this book describes that process.  I hope one day to be able to look back at my time here and echo Daphne’s words:

“I walked this land with a dreamer’s freedom…” 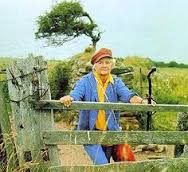