For me there was an atavistic connection: strong and raw.  Unsophisticated, preliterate.

There was a darkness so thick it felt like a warm bath, yet the air was crackling sharp with cold.  And the pin-bright sliver of moon hung over the water between the cliffs.  A scimitar shining; sprinkling magic.

There was a silence so heavy that the very air was breathless.  Waiting.  And the silence gave us the gentle rhythmic lapping of the water against the quay.  Softly, softly…

In time the ponderous ferry arrived: levers creaking, engine churning, metal scraping concrete as the ramp was lowered.  A lonely car departed its deck and we walked on board in its place.

The voyage across the estuary from Bodinnick to Fowey takes barely 5 minutes.  We were going to the Fowey Christmas market.  But already those few moments on the other side of the river had been enough to make the evening truly memorable.  Something special was in the air.

It’s a gentle ten-minute stroll through Fowey’s narrow streets from the ferry to the main quayside and the centre of the town.  This was only the last weekend in November but houses were lit up.  Dancing lights played against whitewashed walls; Christmas trees glittered and sparkled, glimpsed through bright windows.  The town lights were due to be switched on this very evening, but Fowey residents were already ahead with their festive garb.

The marquees were warm, crowded and noisy.  A plethora of gift, food and drink stalls, enticing aromas, tantalising tastes, and colours – a visual feast as much as anything.  Heaven for the senses.  Outside, a singer crooning.  A crowd gathered round, shining faces, laughter, smiles and bonhomie.  He was very good, the singer.  Barbecue smells mingled with snatched conversation and children’s eager voices. 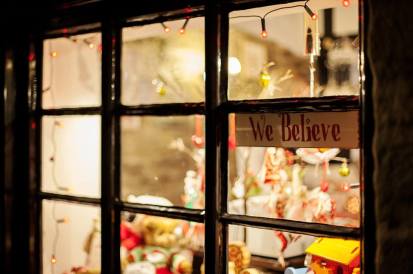 Light played on blazing shop windows artfully festooned.  Yet it left dark corners untouched just a few feet from the beaten track. Our breath smoked.  The air crackled with Christmas.

We didn’t linger to listen to the singer, much as I would have liked to.  We had only an hour.  We hadn’t realised until we arrived at the ferry that the last return journey of the evening would be so soon.  We had only an hour and would miss the switching on of the lights.  Never mind, there was atmosphere abounding and we were soaking it up.

I’m not sure why I led us around behind the marquees.  They were a tight fit on the quay; there was nothing more behind them.  Actually, I do know why.  I wanted more of that other atmosphere – the treacle-thick, primordial silence with the scimitar-moon and the darkness.  It was still there.  Water lapping, the rising jumble of Polruan across the black water; dark shapes and shining windows climbing from waterside boat sheds to St Saviour’s Chapel on the top of the cliff.

And then, there was more.  First a sound too faint and distant to discern.  It was something…. But what?  Drums!  It sounded like drums!  A dark shape glided down the river hugging the opposite bank.  A boat.  A boat carrying Father Christmas. And with him, his band of elves.  Drummers.  Rhythmic, timeless, insistent, visceral.  A sound reaching back centuries, beyond our modern-day concept of Father Christmas and all that he now represents.  An evocation of the years of strength, of grit, of determination to survive in the face of the elements, in a land where magic and mystery walked alongside hard work and poverty. I have never heard anything like it before, under such circumstances.  It seemed as far away from the trappings of a modern, commercialised Christmas as it was possible to be.  Away from the crowds as we were, it seemed that the drums sounded only for us.

The boat ploughed up and down the waters, slowly coming closer to shore.  The drumming louder, more demanding, more pagan with each sweep of the quay.  As we made our way back from the centre of the town towards that final ferry sailing, the boat docked and Father Christmas alighted to the cheers and cries of excited children.  Adults and children alike had gathered to process behind him as he entered the town.  He, it would be, who switched on the lights. 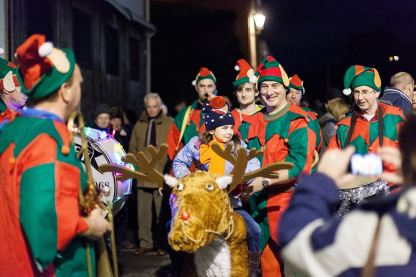 But our time was up.  We walked in the opposite direction, away from the revellers and towards the dark.  I wondered how many of them had heard the drums as I had heard them.  The majority, I speculated, must be regular attendees; they will have seen it all before.  What they heard would have been the annual heralding of Santa’s arrival – or would it?  I have yet to meet anyone born and bred in Cornwall who doesn’t exude an aura of their heritage so perhaps I was mistaken.  Underneath the smiles and happy cries, perhaps each Cornish heart was also stirred.

But equally, perhaps there are occasions where it’s a blessing to be a stranger in a strange land and thus to experience what has become familiar to others but is numinous to the newcomer.  For me there was an atavistic connection: strong and raw.  Unsophisticated, preliterate.  The sound of those drums on the water reached back through the gleam and glitter, the bonhomie and the shining faces of a twenty-first century Christmas.  They reached back to a time when faces were pinched in the cold, expressions were grim and dogged, yet still there was time to revel and celebrate the dark mid-winter festivals with heart and soul, and yule logs and holly and ivy.  For me, Old Cornwall – Kernow – was in the sound of those drums.

We didn’t see Fowey fully lit. Our ferry was insistent.  It lumbered across the water, taking us back to our car and the short journey home.  But what a breath-taking experience.  And what a joyous and magical start to the festive season.  Next year we shall be back.  Next year we shall have more time.  I suspect though, that we will never again recapture those glorious moments of inky silence, ancient rhythms and festive surprise.  This year was special.

None of these photos are mine, sadly.  Those of the market I’ve taken from its Facebook page.  The photo above, and it’s cropped section at the top of the post, is an all-time favourite of mine and was taken by Bernie 10 years ago. ‘The Moon over Montegabbione’ – a tiny hillside town in Umbria.  Substitute summer for winter, mountains for water…. Yet the moon and the darkness on each of those respective nights were the same.  And each was brimming with breathless magic…

34 thoughts on “The View From Here: reaching back”