Sometimes stories are necessary for quieting the soul

It is said that no matter where you look on Dartmoor, you can’t help but have a tor in view.  Frustrating then, that I managed to miss all of them in the wider landscape shots I took.  But we did spend some time getting acquainted with one tor in particular. 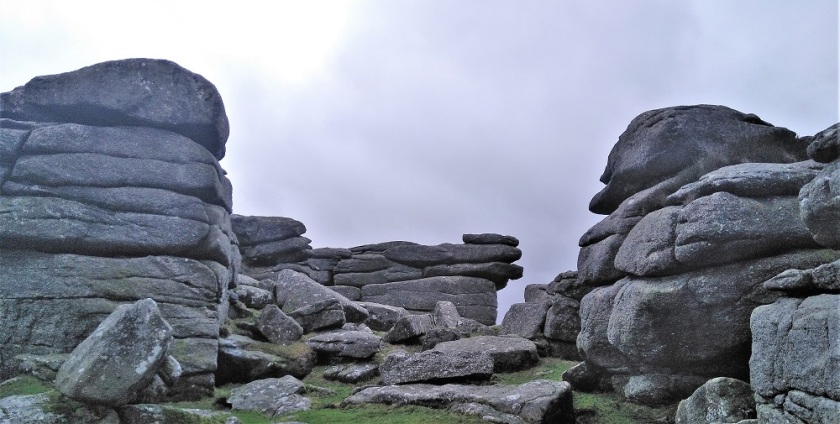 Tim Sandles, compiler of the extensive Legendary Dartmoor site, suggests that the word originates from the Celtic twr, which means ‘tower’.  The definition of a tor, he tells me is: “a prominent outcrop of rock that can occur at any point between valley floor and hilltop”.  There are almost 150 tors on Dartmoor. Tim offers a comprehensive account here of how they have been formed over the millennia.

My old friend Sabine Baring-Gould devotes chapter two of A Book of Dartmoor to tors – putting them second only to bogs.

He quotes from his colleague, Collier, addressing the Devonshire Association in 1875:

The tors – Nature’s towers – are huge masses of granite on the top of the hills, which are not high enough to be called mountains, piled one upon another in Nature’s own fantastic way.  There may be a tor, or a group of tors, crowning an eminence, but the effect, either near or afar, is to give the hilltop a grand and imposing look.  These large blocks of granite, poised on one another, some appearing as if they must fall, others piled with curious regularity – considering they are Nature’s work – are the prominent features of a Dartmoor landscape, and wild as parts of Dartmoor are, the tors add a notable picturesque effect to the scene. 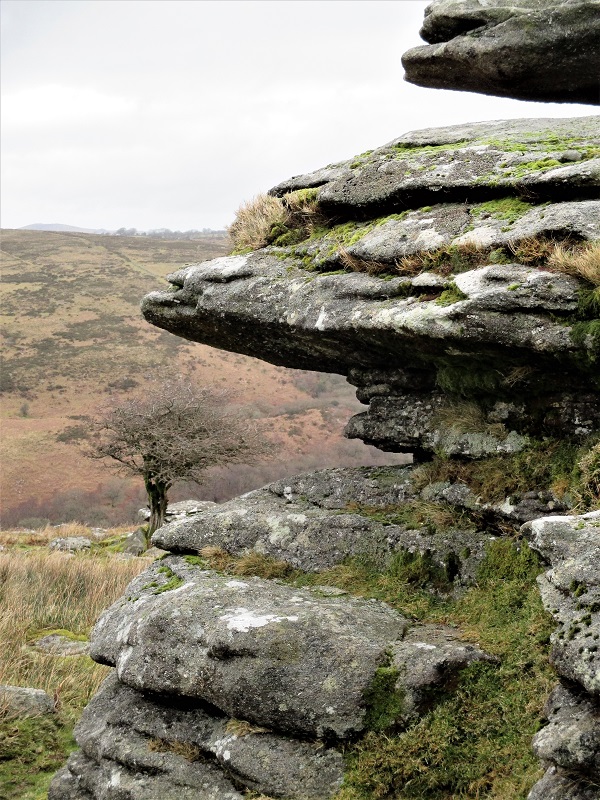 Having taken to the roads on foot, we next took to the roads by car.  We drove that way and this, twisting and turning along unused roads with no particular destination in mind.  Bernie had a fancy to visit Hexworthy, perhaps because of its evocative name.  It was remote and atmospheric with a wonderful old bridge that I later learned was a location for the filming of War Horse.  Climbing out of Hexworthy we were atop the moor and right there beside the road was a tor.  And next to the tor was a car park.  Most things may be closed here in January, but some things are at their best in these inclement months.  The place was deserted, and we could breathe in the whistling air and immerse ourselves in the passing of eons.

At the time we had no idea which tor we stood beside.  We were not encumbered by knowledge; we had only to absorb the atmosphere.  The wind was sharp, yet the silence was biting.  The views down into the valley were sweeping, yet the intimacy – the immediacy – of the grey granite stacks was compelling.  What history these rocks will have witnessed.  How many seasons of harsh winters and misty autumns, crisp vibrant springs and far-seeing summers will have passed alongside and between these crags.  I thought of the people who will have passed this way too: from the Neolithic and Bronze Ages to the current armed forces who sometimes use this land for training purposes.  And between the two – generations who forged a living in these beautiful but inhospitable climes.  Tinners, peat cutters, farmers and no doubt the occasional Anglican priest, passing back and forth along tracks worn deep by the countless hooves of ponies, sheep and cattle and the rhythmic tramp of human feet.

On the sides of the tors are what are locally termed ‘clitters’ or ‘clatters’ (Welsh clechr), consisting of a vast quantity of stone strewn in streams from the tors, spreading out fan-like on the slopes.  These are the wreckage of the tor when far higher than it is now, i.e. of the harder portions that have not been dissolved and swept away.

It doesn’t surprise me that so many legends and tales have formed against the backdrop of Dartmoor.  Centuries back, these mysterious formations will have defied, yet demanded explanation.  Sometimes stories are necessary for quieting the soul. 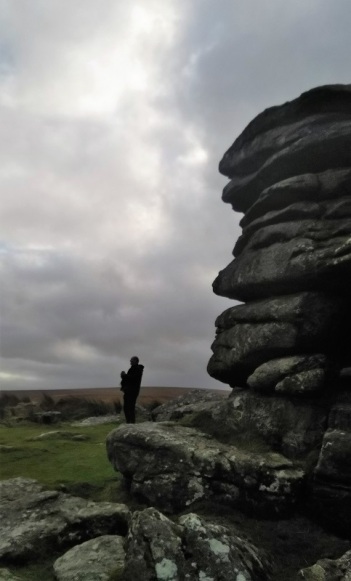 This, and more, filled my mind with formless thoughts and impressions as I wandered cautiously, camera in hand.  Perhaps it was this sense of the past, and the stories to be told if only the stones could speak, that led me to relax into the place.  So much so, that before I knew it I was on the ground, one arm and leg bent under me, taking in a worm’s eye view of the rocks and wondering how I’d gone from upright to prone without noticing.  Luckily at the time I was on the grass rather than on the granite.  I can confirm that the springy, sodden sedges are very slippery, and are indeed covering a very high-water table in January – but consequently form a suitably soft, if extremely damp, landing place.  At least there were no witnesses to my downfall so not even my pride was hurt.  And thankfully, I didn’t recover my wits only to see my camera ignominiously sinking into the mire…

Tim Sandles on clitters: “Personally speaking they are one of the most unpleasant things to walk through and an accident just waiting to happen.”  It’s not just me then!

Back at the hotel, distracting myself from how I was going to get the mud out of the almost-new coat I’d been wearing, I established that we had visited Combestone Tor.  As well as adding some geological detail, Tim Sandles mentions how popular the tor is in the tourist months because it’s so accessible.  As tors go, Combestone is not one of the highest or most dramatic and I’m so pleased we saw it as we did – isolated and commanding.

Tim also tells an interesting little tale about an irritating ‘tourist’ he met there.  Perhaps the stories of magic and mystery still hold some truth in them…

16 thoughts on “A Triptych on Dartmoor: a tor, a trip, a tourist tale”