It’s been a busy couple of weeks and this month’s Six Degrees of Separation caught me by surprise.  Hosted every month by Kate at books are my favourite and best, we each begin with the same starter book and link a further 6 books to make a chain.  Each book only needs to link to the one immediately before it.  Being late to the party this month, I managed to resist reading any other chains until I’d got my own links in place. 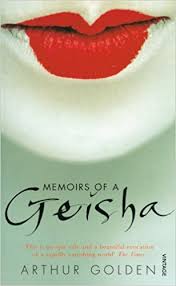 We begin with Arthur Golden’s bestseller, Memoirs of a Geisha, published in 1997.  I read this book a few years after it was published and I loved it.   Chiyo Sakamoto is sold at the age of nine to a geisha house in Gion, the premier geisha district in Kyoto.  Her sister, Satsu, is sold alongside her, but is deemed less suitable and is forced instead into becoming a prostitute.  The story is told in retrospect when Chiyo has retired and is living in New York.  Like many, I’m sure I was seduced by this immersion in a culture both shocking and exotic.  I’ve just learned, through this month’s Six Degrees, about the ‘other’ book, written by the geisha on whom Golden’s story was based.  Her book shows a very different version of geisha life.  As a result, I am very tempted to reread Golden’s book and follow it up with the autobiography, Geisha of Gion by  Mineko Iwasaki.  But I’m also hesitant.  I read Memoirs of a Geisha at a very specific moment in my life and my experience of the book is very much linked with that period.  I suspect that to reread it may be a backward step.  That said, I’m still tempted… 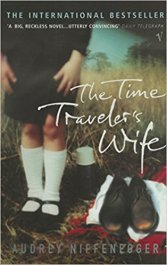 But on with the chain.  Following this line of thought, the book that immediately came to mind was The Time-Traveler’s Wife, the debut novel by Audrey Niffenegger, published in 2003.  I read this a couple of years after Memoirs of a Geisha, also at a very particular point in my life and it is another book that I loved at the time but hesitate to return to.  Claire and Henry’s complicated love is played out against his unpredictable time-travelling.  The book jumps backwards and forwards with each of them appearing at different ages as he catapults through the years.  I remember finding it so difficult to grasp the chronology to begin with, but having got to grips with it, reading on compulsively with an impending sense of doom.  I finished the book high above the ocean, flying home at night, with tears streaming down my face.  Just as well everyone was asleep… 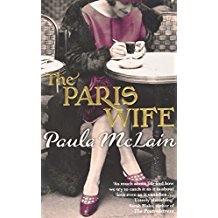 From here I mused briefly on the seemingly vast numbers of books entitled “The (insert descriptive word of choice) Wife”.  There are hundreds!  And my choice for the chain is The Paris Wife by Paula McLain, published in 2011.  The book is a fictionalised account from the perspective of Hadley Richardson, the first wife of Ernest Hemingway, and depicts their whirlwind marriage and their years living in Paris.  It may have been the first of these fictionalised lives I read.  Along with books called “The (insert descriptive word of choice) Wife”, fictionalised biographies of real people also seem very popular at the moment.   Reading The Paris Wife made me determined to read some Hemingway and I duly bought several of his books – still unread.  Oh dear… 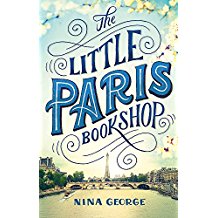 But my next link didn’t lead me to Hemingway or to another ‘wife’ book or a fictionalised biography.  Perhaps because I’ve recently finished it, my thoughts settled on The Little Paris Bookshop by Nina George and published in 2013.  The Paris connection is obvious.  I expected to love this book.  A book about books: quirky, very French… what’s not to like?  Jean Perdu owns a barge, moored on the Seine, from which he sells books in a very particular way.  His bookshop (book barge?) is known as a literary apothecary.  He helps many of his friends and customers through his instinctive selection of books for them but is unable to mend his own broken heart.  Casting off on a sudden whim, Jean takes the barge through the rivers and canals of France, encountering various weird and wonderful characters along the way.  He is traveling to Provence, home of his beloved and long-lost Manon, and where he hopes to find peace of mind and the closure which will enable him to move on in his life.  An easy to read book and I did enjoy it, though it left me just a touch disappointed.  I couldn’t help feeling that it could have been much more. 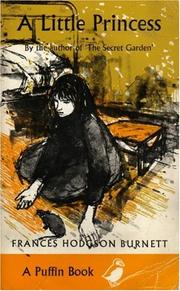 My next choice is A Little Princess by Frances Hodgson Burnett which was published in 1905.  An aunt and uncle very dear to me gave me this book when I was young, and I know my aunt had picked it out for me with great care, just as Jean Perdu selected books for his customers that he knew would speak to their hearts.  My life was of course, nothing like Sara Crewe’s, but oh, how I identified with her!  It was an inspired choice! Quite why I identified with this orphaned girl who was so badly treated at a boarding school is lost to time.  But I notice that Amazon describes Sara as an exceptionally intelligent and imaginative student: that’s probably the reason! 😀 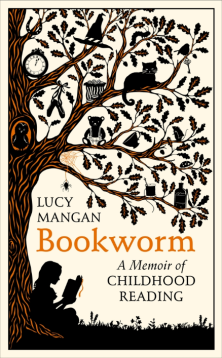 Musing on childhood reading brought to mind a very recently published book that has appeared on one or two blogs lately and which I am very much looking forward to reading:  Bookworm: A Memoir of Childhood Reading by Lucy Mangan.   I was a dreamy, voracious reader as a child and childhood books still hold a special place for me.  I know I will love this trip down memory lane, both for books that I loved as a child and those I loved reading to my own children.

From here I jump to the books of Lucy M Montgomery – a prolific children’s author though I never read any of her books as a child.   I finally came to Anne of Green Gables just a few years ago and I was captivated and read the entire series.  They may be children’s literature but there’s an ageless appeal to Montgomery’s writing: the descriptions of nature, the wonderful characters, Anne’s irrepressible and imaginative spirit.  (On reflection I’d much rather identify with Anne of Green Gables than with Sara Crewe!)  However, the book I’m adding to the chain

is not from the Green Gables stable.  I’m adding The Blue Castle – which I started reading last November and have yet to finish.  Published in 1926, it’s one of Montgomery’s few books for an adult audience.  Valency Stirling, having received some distressing news about her health, turns away from her restricted, repressed family and becomes a rebellious free spirit.  I was enjoying this book last year and can’t think why I got distracted from it.  I’m inspired again now to start from the beginning and read it through before the year is out.

The Anne books are of course set on Prince Edward Island off the eastern coast of Canada.  (The Blue Castle is the only one of Montgomery’s books set entirely outside Prince Edward Island.)  We very nearly got there last year – one day we will make that trip.  As part of the plan for the holiday that never happened I was drawn to a wonderful holiday home on Grand Manan, an island which was also to be a stop on our tour.  Only as I read about this beautiful house did I learn that it was the 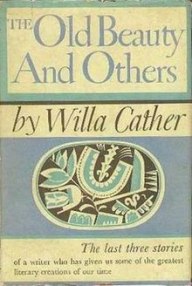 house used by the author Willa Cather as her summer home.  She would write here through the summers of 1922 to 1939.  I have yet to read anything by Willa Cather despite reading so much about how wonderful her books are.  I could choose from a number of her famous and prize-winning novels as my final link in the chain but I’m choosing instead The Old Beauty and Others: a collection of 3 short stories published in 1948, the year after her death.  One of those stories, Before Breakfast, is one of the last that she wrote, and is set on Grand Manon.  It seems fitting.  And hopefully one day I’ll read on Grand Manon, in her former home.

My chain this month seems particularly personal.  There’s a strong focus on female protagonists and books that have particular personal resonance.  As well as a spot of time traveling, I’ve visited Japan, spent time in Paris, cruised the waterways of France and lingered in Atlantic Canada.  I would never have guessed at any of these titles appearing when I knew what the starting book would be.

Next month’s starter is also a book with personal resonance but for different reasons entirely.  The Poisonwood Bible by Barbara Kingsolver is one of my daughter’s absolute favourites and she has tried in vain a number of times to get me to try it.   Why I can’t read it remains a mystery but it will be an interesting starting point next month!

41 thoughts on “Six Degrees of Separation: from Memoirs of a Geisha to …”