The view from here is magical, mysterious and multi-coloured

Today has been a touch frustrating.  We still have no phone line and the mobile signal is not great.  The internet is so intermittent that it seems to dominate everything as we monitor it in order to catch it when we have the chance.  It has taken all day on and off to research and source a fridge/freezer and I still haven’t been able to contact the company and check delivery.  It occurs to me with our access issues that I should check what size vehicle they will deliver in.  And we’ve both been tired.  I’ve still achieved a reasonable amount but it feels like a wasted day somehow.  Perhaps because of the early morning highlights: maybe everything had to be downhill after that…  (Apart from our driveway of course 😉 )

Last night was another occasion where I woke up in the early hours, in total darkness, and knew I wouldn’t sleep again.  I didn’t mind; I wasn’t tired; my thoughts were already turning towards quiet time with Harri; a chance to catch the dawn a chance to read; a chance to write.  And with the choice of both a sofa to sprawl on, plus a table and chair to work at, I was happy to leave B sleeping and creep quietly upstairs.

The wind was strong and from the north-west.  It had blown in last night was driving the rain against the front windows, battering them hard.  Yesterday had been an exhilarating, blustery day: bright and breezy and showery.  But nightfall had brought with it some serious rain and the strongest winds we’ve had since arriving.  Coming from the north, the rain beat against the windows and the wind wailed and whistled and whipped around the house like a thing possessed.  And it wuthered!  This is a wuthering house!  It’s marvellous!  I feel surrounded by weather here.  We have windows on all four sides, and views from 3 sides.  Whatever weather there is can be fully experienced.

The darkness here is velvety-deep.  But slowly a horizon formed: the skies lightened just a fraction.  The pheasant is the first to call each morning it seems, with the smaller birds chiming in very soon afterwards, and his call alerted me to the first vestiges of the day.  This was second sunrise I’ve watched here.  I had rather expected not to be able to see sunrises but yes – I can enjoy them; I just have to be in the right part of the house.  Currently the right part for sunrises is piled with boxes and unplaced furniture and also contains a redundant second kitchen, but when we have created the room we’re envisaging in that space it will be perfect for writing and for watching the sun rise.  Such a useful multi-purpose room!

At the moment, with a bit of effort, I can squeeze around the obstacles and hang out of the windows to listen to the sounds of the morning coming alive and watch the clouds take up the colours of the dawn.  How fleeting these moments are.  I duly padded along to the east windows to see a solid bank of dark grey cloud with the barest hint of silvery edge.  I assumed there would be no visible sunrise today: simply too overcast.  A few moments later, back at the laptop on the other side of the house, my eye was caught by a mass of 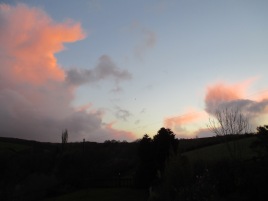 pink.  The cloud had opened, turned its face towards the east and was blushing prettily as it welcomed the daylight.  And now we have blue skies with ribbons of white and grey cloud along the horizon.  The sun is up and casting long shadows on the opposite side of the valley.  The windows are spattered with last night’s rain; the wind is whistling but no longer wailing and the birds have arrived for their breakfast.  A new day calls….

I would have been quite content with that opening to the day.  B was still asleep; I moved from the laptop to the sofa, one eye on my novel, the other on the birds feeding on the balcony.  Which was how I saw the rainbow. I was at the window like a shot, and what a rainbow it was!  It was magnificent: the colours clear and sharp and vibrant.  Initially it sprung from the wooden barn just across the valley and that alone made my heart sing, but then it stretched downwards… I could see the colours quite clearly: it stretched downwards over the grass and into the valley, just a stone’s throw

from where I stood!  For a fleeting moment I could see the entire arc; each end touching the earth.  I rushed for my shoes, determined to go outside to capture the best possible shot with my point and shoot.  And of course, in the few seconds it took me to fetch the shoes, the moment was passing.  Colours had begun to fade; the drama was dissolving; it was as if it had never been.  At least I had some shots taken through glass. When B came upstairs a few moments later there was nothing but cloud in the sky.  But me and Harri and our tiny feathered friends had seen it.  And now I know where that crock of gold is buried: right here under our noses!  The view from here is magical, mysterious and multi-coloured.