Tuesdays have become notable since we arrived here.  On our first Tuesday I found Lansallos Cove.  On our second Tuesday Broadband found us.  And on this, our third Tuesday, we woke at dawn and B said: “Let’s go out for lunch today.”  And we did.  It was perfect.

We decided to visit to Lerryn, a village with a well-regarded pub on the banks of the Fowey and just a couple of miles from home.  I drove, and set off confidently: I had seen signs for Lerryn when we’ve been out and about.  And as ever, my confidence was misplaced.  We crossed what passes for our main road and descended down a narrow road.  Descending is good; the village is on a river after all.  Cornish miles do seem to be longer than Kentish miles.  Or miles in Sussex, or Oxfordshire.  Cornish miles seem supremely long.  In part this is because I drive so slowly: the roads are narrow; the roads are twisty; there is nowhere to go should one meet a fellow traveller.  And in part it’s because signage isn’t always regular; indeed it often seems to peter out altogether.  Which is what happened here.  But we didn’t meet any oncoming tractors, and the lanes were remarkably pretty and we weren’t in a rush, so we trundled along quite happily.  We came to a tiny bridge over a tumbling brook with a helpful sign to the church pointing along one of the two choices before us.  Which church wasn’t specified but we felt we must be close to the village.  We were not.  We travelled on, climbing up again now: can this be right?  A van came up behind us; I pulled over at a rare and very convenient open spot.  The van passed by, brimming with confidence.  Dora was consulted.

“Oh, we’re doing fine,” B announced, keeping Dora’s voice low and hiding the screen from me.  “We’re only a couple of miles away.”

“We were only a couple of miles away when we started,” I mumbled under my breath.  “And that was twenty minutes ago.”

More of those lanes where the grass grows thick along the middle and the wing mirrors brush the banks on both sides…  But we made it.  All is well.

Lerryn is a gem.  We arrived knowing only that it lies beside a river and it has a pub.  We found a scene of pastoral tranquility.  There are dwellings of various sizes, colours and antiquity; a splendid well-stocked shop; a community library (as part of the pub); a lively primary school (based on the sounds of children playing in their lunch break), and a sweet little community shop where individuals bring items in that can be resold for charity.  We took a look; nothing leapt out crying, “Buy Me!”   We still have more than enough stuff to unpack without adding more.  The Ship Inn was very quiet on our visit, very quiet indeed.  But that didn’t detract from the warmth of the place.  A good lunch was devoured.  We followed it up with an armadillo ice cream from the shop: very nice, though the flavor didn’t quite live up to its eclectic name.  But really, with a name like that you have to try it, don’t you!

Clutching ice creams, and having taken the helpful advice of the lovely lady in the shop, we wandered back outside into the spring sunshine.  It was a beautiful day.  And a beautiful scene.  The river bed stretched wide and tranquil ahead of us.

It was low tide; boats were lying at angles on the river bed, the water just a shallow trickle for the moment.   This was not the River Fowey, I learned later, but the River Lerryn – a tributary of the Fowey.  Whatever its name, it is beautiful.  And it has stepping stones!  They stretched invitingly across to the far bank but I am a wimp and took the slightly longer route over the Elizabethan stone bridge.  I’m pleased that I did, for I saw my first swallow of the year, sitting on a telephone wire beside the bridge.  B, of course, set out intrepidly.

As I rounded the last corner to rejoin him on the other side I noticed the long legs of a young woman who had been in the shop with us, flashing across the stones at speed and I quickly saw why.  The tide had turned; in the five minutes it took me to stroll over the bridge the stones were rapidly disappearing.  Definitely a good thing I didn’t attempt them.  I would have been exceedingly slow and would probably have frozen part way across – with the water rising around me.  I feel about stepping stones like I feel about heights.  It’s a balance thing.

We set off in the direction the lady had advised, along the river bank and into Ethy Wood.  We didn’t go far; B wasn’t in the mood for a route march.  And that didn’t matter because the woods, and the river bank were so lovely I wouldn’t have wanted to walk any faster; I wanted to absorb, imbibe, soak up the wonderful ageless feel of the contorted trees and the ferns and moss – often growing along the branches as well as on the ground. 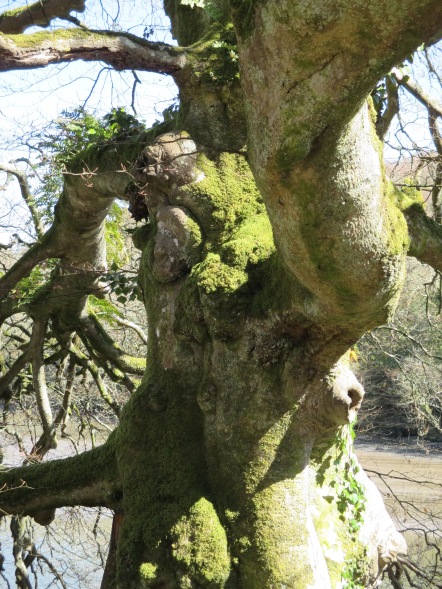 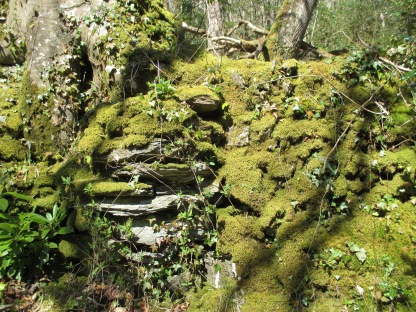 The juxtaposition of the verdant fresh greenery and these noble, ancient trees was wonderful.  The sun played on the water, and an occasional bird flew past, or called unseen from the opposite banks.  We watched a lone white egret, motionless in the shallows.  And a solo kayak travelled silently against the incoming tide, paddles scarcely raising a ripple.  I envied him the peace, the graceful movement, the ownership of this gorgeous stretch of water.

A tantalizing creek wound off from the river with reed beds on either side.  My thoughts turned to A Year of Marvellous Ways by Sarah Winman, which I’m reading at the moment.  Marvellous – for the Marvellous Ways in the title is the name of an 89-year-old woman – lived in a place such as this.  More isolated perhaps, but I could see her in her caravan, with her boat… And where we stopped before turning back was evidence of a mooring point; perhaps there had been a jetty here at one time.  I said it was probably a smugglers’ haunt but B disagreed.  It was too open, he said.  But Lerryn, like many villages in these parts, was a smuggling community and everyone was involved.  Only when the coast guard was introduced in the 1850s did smuggling go underground and eventually fall away.  Regardless of whether we were standing on the site of a smuggler’s landing point of old, Daphne’s Frenchman’s Creek flashed into my head.  Dona, Lady St Columb and her dashing pirate – on a day such as this in a place such as this….

Yes, I could see them. The view from here stretched back centuries: time meant very little.

We headed back towards the village, meeting some dog walkers along the way.  Only then did I appreciate that we had had these old paths to ourselves for over an hour.

What a privilege.  I shall return.  As will the stepping stones.  When we arrived back, it was as if they had never been… 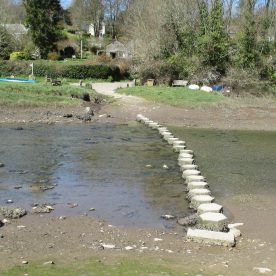 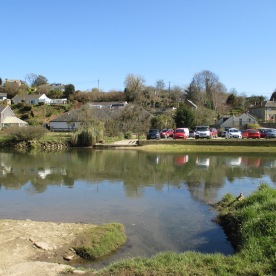 2 thoughts on “The View from Here: Lerryn”