Looks like we may have another runner in the family!

The first day of May and it’s pouring down.  What a contrast from yesterday.  There are May Day celebrations all around here, including a very ancient traditional one in a nearby town.  I’d hoped we might go along but the weather put us off.  It would have been pretty miserable.  Something to add to next year’s calendar instead, but what a shame for those who’ve worked hard to create a spectacle on this Bank Holiday Sunday. 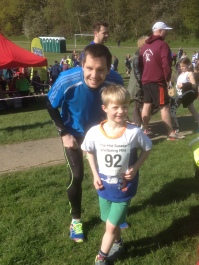 It was not raining everywhere though.  I had a call mid-morning from Ellie – on Evan’s behalf.  Inspired by a friend at school, who’d brought his medal in to ‘show’ last week, and perhaps by his Uncle Tom at the marathon, Evan decided he wanted to run a race and win a medal. As luck would have it, before the main weekly park run which Tom & Russ attend regularly, there is apparently a children’s race. Duly entered and with race number to prove it, Evan set off to run his first mile.  And he ran all the way. Tom ran alongside him, partly to ensure he didn’t get lost if he gave up and stopped part way round, and partly to help him to pace himself. And he did it.  Without stopping.

Evan was inordinately proud of his achievement – hence the phone call.  Later I heard the end of the story.  Talking after the event, Evan declared that next time, he would run on his own because: “Uncle Tom is really so very slow, you know.  He held me back.” Ah, the innocence of youth!

Well done, Evan.  Looks like we may have another runner in the family!

As for me on this damp and dreary first day of a new month: I gave myself a bright new hair colour.  And there’s no pictures of that!