On a sunshine-filled day in May, the view from here is exhilarating.

It seems that when it rains in Cornwall, it rains properly.  Often it’s a soft, gentle rain, so fine that it’s almost invisible – unless you’re standing in it.  And sometimes it’s hard, heavy and unforgiving.  We’ve had entire days of rain, and even more long nights of it.  But looking back at May, I think we did pretty well on the weather front.

May opened her performance with a day of relentless, unremitting rain: the hard, heavy and unforgiving kind.  All thoughts of joining some local May Day celebrations were quashed.

But before the week was out we were blessed with cerulean skies and wall-to-wall sunshine.  Perfect bike riding weather.  For B that is – not me. 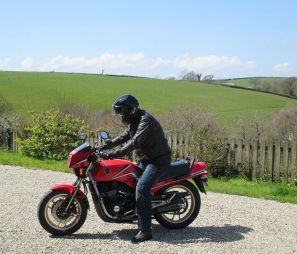 With a few days of exhilarating sunshine under our belts, we headed into a grey, dreary spell – not great for the Fowey Festival.  It was kicked into touch by some sparkling sunshine mid-month, lifting the spirits and tempting the shy leaf buds to unfurl at last.

Slowly, slowly… and then with an exuberant rush, the trees transformed.  May has been the month that saw the skies and the valley blossom.  We no longer look down on a perplexity of stark, twisted, pointy boughs; instead we have a lush verdurous, sylvan canopy.  May has given us a valley green and plentiful.

On a sunshine-filled day in May, the view from here is exhilarating. 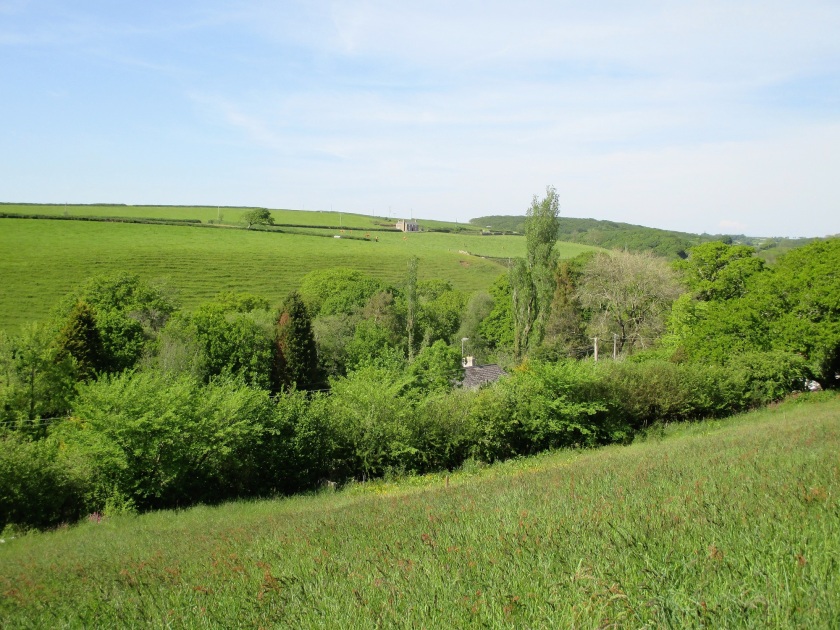 She has been a month of ethereal, misty mornings.  We have had gentle ribbons of mist curling amidst the nooks and hollows.  There have been opaque and creamy mists filling the valley and cloaking the trees.  And once I climbed the stairs to a spectral light: a pea-soup of a mist that was so thick it seemed almost solid and felt like a living thing.  It massed along the picket fence; I could envisage tendrils stretching through, trying to envelope the house and pull us into its clutches.   The makings of a good horror story in fact!  I was so engrossed in this eerie phenomenon that I quite forgot to capture it on camera – instead, I watched it retreat: peeling back down into the valley, releasing the trees, slithering up the far side and vanishing slowly over the horizon.  (The beast was back in its lair…)

And on the clearer mornings, I’ve watched ochre-brown calves cavorting, and birds a-courting and on a single, spellbinding, golden, morning:  a perfect, solitary roe deer.

Even on the rainy days there were blessings to be enjoyed.  One particular evening, late into the month and sandwiched between sunshine-filled days, the sun left us with a gentle whisper of farewell, and the rain began. Soft, gentle but persistent rain. I sat with my back to the open doors, enjoying the damp air and relishing the scents that rain offers us. And later, I fell asleep to the sound of raindrops pattering outside… 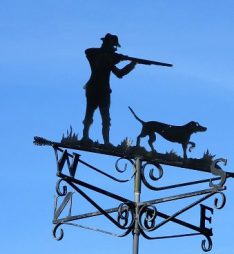 We’ve had warm, still, peaceful evenings in which to watch the swallows on the weather vane; to wander around the garden at dusk, or to linger a moment or two on the balcony after nightfall.  The brook in the valley babbles softly at night, offering a contemplative accompaniment to the haunting calls of the owls.

Frequently, as the day draws to a close, the wind drops and stillness reigns.  And with many an evening came a spectacular sunset, with birds flying homeward and, if we were particularly lucky, a fleeting glimpse of a misty moon.

The final third of May has been marvellous.  Most days we enjoyed glorious, brilliant sunshine: exploding with life and energy and the perfect accompaniment as we shared Highfield with the first of our family.

May came in like a damp squib and departed in a blaze of glory.  And now – summer approaches, and tempts us with promises of much more to come…

“What is so sweet and dear

As a prosperous morn in May,

The confident prime of the day,

And the dauntless youth of the year,

When nothing that asks for bliss,

And half of the world a bridegroom is,

And half of the world a bride?”

I’d picked this poem to illustrate how this year’s May has resonated with me – only to discover that it was included in the 1919 edition of The Oxford Book of English Verse, which was edited by Arthur Quiller-Couch, one of Fowey’s famous sons. A particularly satisfying closure …

One thought on “The View from Here: exhilarating May”