If the first half of our walk can be defined as steeped in history, the second half can be defined as awash with nature.  Both halves gave us views: the first of woodlands and settlements; the second of coastal grandeur.  There’s no need to make comparisons: they combined to give us a wonderful day.  A good walk with a dear friend, at a leisurely pace through magical scenery.  What could be better!

Leaving behind St Wyllow’s Church and the history that marks the Hall Walk, Karina and I set off for the coast.  The short walk along a quiet, nondescript road was enlivened by the rescue of several large hairy caterpillars, who seemed hell-bent on reaching the other side. Karina has a passion for wildlife; they had to be helped on their way and saved from risk of heavy car tyres or tramping feet.  The lovely Amanda from What’s Wild in Cornwall has suggested we were rescuing caterpillars of the oak eggar moth.  I am so ignorant of anything related to moths.  Thank you, Amanda!

A short stroll beside the road before turning alongside a hedge and we were facing the coast: ahead of us, Pencarrow Head, and to our right, the cliffs above Lantic Bay.  The hedgerow we walked beside was alive with wild flowers – truly beautiful.  And from above our heads came the pure clear notes of a skylark.

There was so much space; so much air, sky and sea.  Everywhere we looked offered a view and the vistas crackled with energy.  We were enthralled.

Pencarrow Head hadn’t been part of the added loop but it seemed foolish not to explore it a little now it was here in front of us.  Sea views to the left and right; blazing gorse bushes; peaceful cattle – though I’m sure they looked at me suspiciously as we passed.  I kept my eyes firmly averted, but I could definitely feel their eyes on me. I was glad once they were behind us.  I do like cows.  I just prefer to like them from the other side of a fence.

Short stretches of path were rather too close to the drop for my liking.  This meant I had to walk leaning away from the edge, just in case.  I’m not sure how I think this might help, but I’m incapable of walking upright if the ground is sloping away steeply.  A few deep breaths, eyes firmly fixed away from the cows and firmly fixed away from the edge… Looking at the sky seemed safe enough.  And sometimes at the grass and gorse bushes on the safe side of the path.  At least I didn’t close my eyes; that really would have been courting disaster.  Karina scrambled up the smooth mound of rock to stand atop against the sky.  She just has to do these things.  I felt the familiar mounting panic and turned away.  At least I could close my eyes safely here.  A few more deep breaths…

But it was exhilarating on Pencarrow, and it fired me up for the rest of the walk.  A few miles westward along the coastal path lay Polruan, where we were eventually bound. A few yards below us at the bottom of the cliff lay Lantic Bay, tempting us with tantalizing views of soft sand and turquoise sea.  There was absolutely no pressure to make the descent to the beach.  But how could we not?  The sun was out; the beach looked beautiful; I had to try. 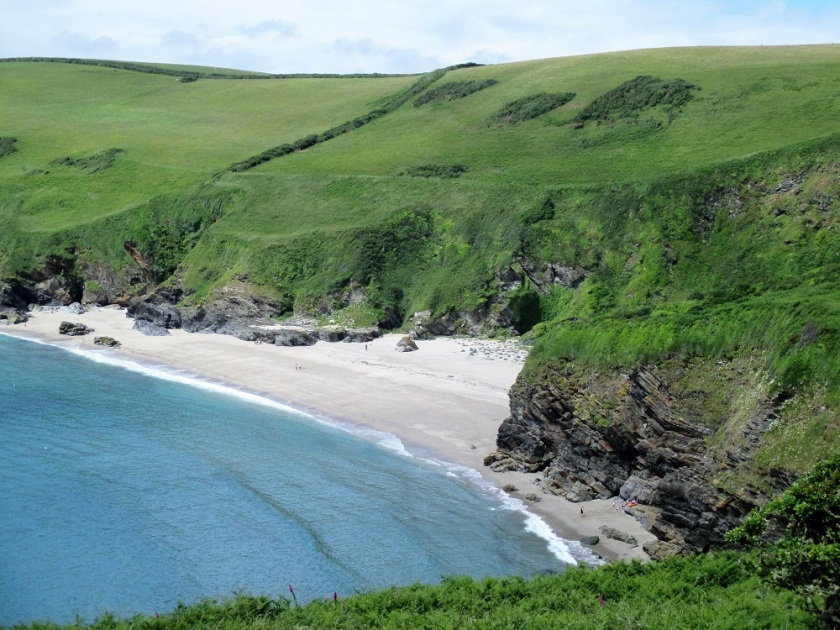 And we made it.  It really wasn’t as bad as I expected; wandering around Pencarrow had been worse.  I think it helped to have the steep side of the cliff rising next to me as we made our way down.  I didn’t feel as exposed to the elements, and I could always grab hold of the strong springy grass bursting through clefts in the rock.  I added stonechats to my mental list of bird sightings and focused on negotiating the goat path through the gorse.  We scrambled down a steep rocky spot – and there we were: standing on Lantic beach.  I had conquered the vertiginous cliffs.

Lantic is part of the long stretch of Cornish coastline owned by the National Trust.  There are several bays with small beaches, accessible only by boat or on foot.  I love how romantic that sounds. My thoughts turn to summer days in the 1930s, with glamorous families basking in the sunshine; wicker hampers containing picnics and champagne, and pretty young ladies flirting with strong young men.  There would of course be dark secrets and intrigue bubbling in the background; and absolutely everyone had a backstory …  But I digress.  And think I’ve watched too many films and read too many books of a certain genre.

On this day there were no such scenes but there were certainly people: not too many, enough to make people-watching interesting.  The various groups ranged in age from toddlers to grandmothers, and there were several dogs.  All of them must have negotiated the descent, which is impressive.  But then – I’m a grandmother, and I managed it: I fear I’m doing grandmothers a disservice!  And I’m mightily impressed by parents who bring their children to this special spot – devoid of toilets, ice creams and all things twenty-first century.

From the beach, the cliffs ascend dramatically.  Rocks reveal powerful patterns: strata compressed over the ages.

There were some wonderful plants and flowers, most of which were new to me.  I recognized thrift of course, and guessed at sea kale – later confirmed.

A little reading after the walk told me that the beach shelters sea bindweed, sea spurge and sea knotgrass – many of which I think we probably saw even if I have no photographic evidence.  Interesting how appending the word ‘sea’ makes these plants seem much more wild, exotic and romantic.  Writing of bindweed, spurge and knotgrass just isn’t the same at all.

I also learned, once home again, that fulmars nest on these cliffs.  I don’t think we missed such a sight…. I hope not.  I may have to go back again fairly soon though, just to make sure.

We spent a while soaking up the atmosphere: warm, clear water in shallow pools; the gentle, hypnotic ebb and flow of the waves; limpets and mussels clinging tenaciously to rocks and waiting steadfastly for the tide to turn.  I’d love to know how many years the smooth old tree trunk has been positioned on the beach – a perfect spot for contemplation. 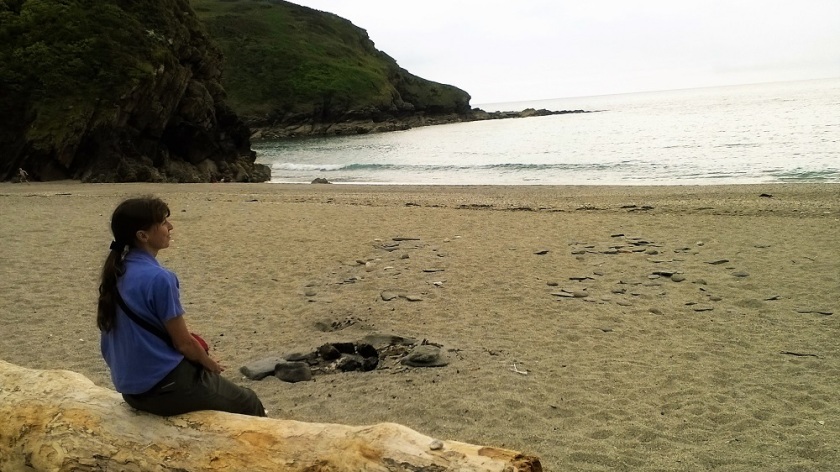 And then came the climb back up.  I can’t say too much about this beyond the fact that there was no breath to spare.  One of the families had set off ahead of us: parents carrying the beach paraphernalia, children bounding up the path like young goats.  We – or rather I – just plodded.  I was the donkey to the children’s goats.  I’m sure Karina would have been a goat too but she was very patient and matched my steady pace – with frequent stops, allegedly to ‘take in the view’.  We had a slightly longer rest at the top, with yet more tiny bright flowers to admire at our feet if we needed a break from gazing at the wide open sea. 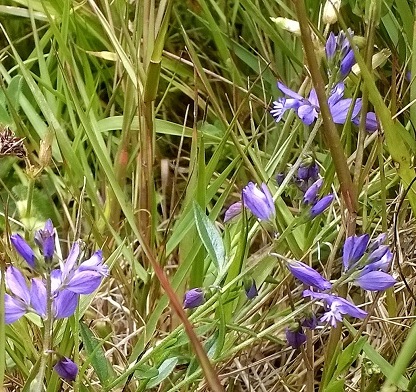 The walk along the cliff top to Polruan was lovely.  The sun was out; the breeze soft and gentle; I wasn’t nervous and my feet weren’t aching at all (though other muscles certainly were after all that climbing).  We walked steadily, up and down the folds in the fields and cliffs; passing a few fellow hikers with nods, smiles and greetings. 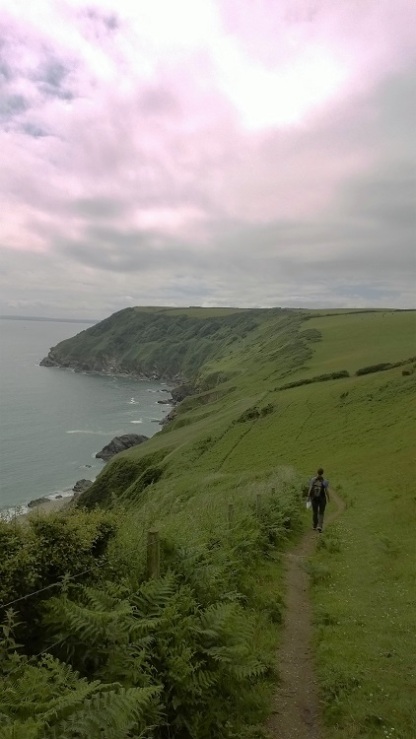 The boats on the sea below seemed motionless although they were actually making at least as much progress as we were.

A boat in the distance on a calm sea has a meditative timelessness to it.  It was very calming walking this section in the afternoon sunshine.

The top of Polruan gave us one of my favourite views in this area.  It touches me every time.  I’m pleased I could share it with Karina as our walk drew to a close.

Down the narrow streets and passageways we went: easy to find your way to the quayside in Polruan – just keep heading down.  The ferry arrived exactly as we did and there were exactly the number of seats for the number of people (and dogs) waiting to make the crossing to Fowey.  Across the estuary, and we were strolling through the bustling little town.

Somehow it was now 5 o’clock.  How did that happen?  The streets were emptying; the shops were closing.  And we had promised ourselves a pasty!  A deli in front of St Fimbarrus church was technically closed.  But their door was open and we cheekily pleaded.  We emerged bearing two magnificent pasties which we took to the quayside, settling on an empty beach to enjoy our well-earned rewards.

The pasties were delicious.  Magnificent in fact.  Karina ate hers daintily.  I tried to do likewise but mine crumbled… flakey pastry and warm filling distributed itself over bench, jeans and the ground at my feet.  Certainly some reached my mouth.  Quite a lot reached the beak of a brave jackdaw who watched cannily from a suitable vantage point, picked its moment to sidle closer before darting in boldly to carry off his spoils.  Ah well.  At least we weren’t mobbed by seagulls.

We finished our feast with an ice cream which I managed to eat without mishap.  A final stroll to the far end of town and a short hop over the water again, this time on the lumbering car ferry.  We were back in Boddinick with just one final climb back to the car park.  When we arrived home, me quietly triumphant at my accomplishments, Bernie had been out and had brought back scones, cream and jam for a cream tea.  Pasties, ice cream and cream tea… the full gastronomic Cornish experience!  But even after all that walking we were too full.  We saved the scones for another day. 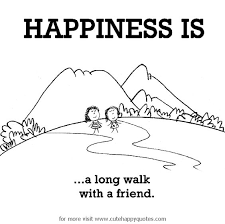 3 thoughts on “The View from Here: conquering the cliffs”