I have focused on three small projects over the summer, whilst we wait to see what the garden will reveal to us.  They each remain works in progress and have met with varying degrees of success.  This is the most successful of the three – the eastern garden.

It’s hard to remember that when we arrived, we were greeted by towering skeletal shrubs with only the top third of each having any suggestion of last year’s leafy growth.  A hard pruning session followed and by early summer we had bright new growth at a reasonable height. 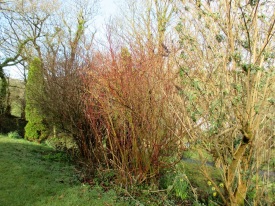 Bernie thinks we should take down the cornus and buddleia even further this year but I’m not convinced.  I am very aware that this part of the garden needs to be on a scale that works from the first floor – where the living rooms are – as well as from the garden itself.  Since it will almost certainly be me wielding the loppers, I think I’ll pretty much repeat what I did last time, though I’ll work more on the cornus to encourage more red shoots for the winter months. There’s still work needed along this bank.  The berberis is huge and we still have a dead conifer to remove.

We have plenty more plans for the lower bank though – which borders the drive.  B wants to add more wild flowers in readiness for next summer and plans to sow seeds.  I’m going to plant bulbs for naturalizing for the spring, and also add a few cranesbills in softest blue, which I admired in the Cornish section at the Eden Project.  They looked beautiful through the soft long grasses, and will also work with B’s hoped-for red poppies.

I’m finally – finally – planting out the cowslips along this upper bank.  Poor things, they’ve been waiting their turn since being potted up as tiny plugs in April.  The plants are still small, and have died back a bit from what’s in the photograph but the root systems are strong and I’m hopeful of delightful nodding yellow heads next year.

The cowslips will be in flower before the massive shrubs get underway so I’m planting this batch under their feet.  I have a few bluebells that came with me too.  I think I may put them here as well.

The buddleia has been slow to come into flower compared with others in the area, but I remain convinced that we live in a microclimate – growth delayed by our openness to the cold north winds.

However, since it got into its stride it has been beautiful.  It is white and I love it!  Every time I go close to it the long white spumes are adorned by red admirals.  I’ve tried and failed so far to get a photo: the butterflies won’t oblige me.  But the colour combination is gorgeous: the creamy white contrasting with the startling red of the butterfly wings.

I am strongly tempted to add a white rambling rose along this stretch.  I’ve always hankered after the rose in one of my favourite paintings.  Perhaps it could grow through the berberis…

I’m also very pleased with the instant flower bed I created in a hollow on this lawn.  Here’s how it looked when I first planted it with hellebores – in readiness for the dark winter months when the nights finally begin to shorten again. 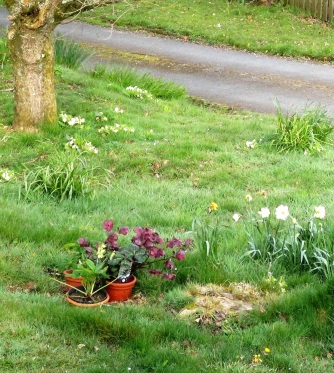 And here’s how it looks at the moment: bright orange California poppies with the vivid blue-purple of geranium Bill Wallis growing through. The california poppies should self-seed; Bill Wallis of course is a perennial.  The hellebores are still in there – waiting their turn to be the main attraction again! 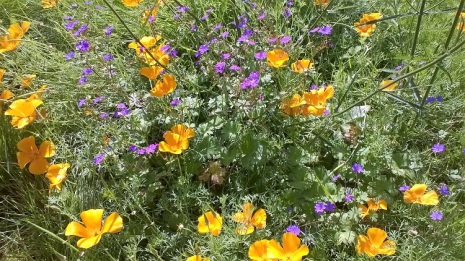 I popped in some verbena bonariensis for height and for butterflies. I’m not sure how well that addition has worked; it looks a little incongruous in the space.  Interesting though, that the red admirals are not concerned with this butterfly-attracting plant.  We have quite different butterflies on these stately purple flower heads.

Overall, I’m very pleased with this little flower bed.  It’s nice to have this splash of colour.  I’ve added a pot housing my hazel – grown from the tiniest seedling given by a dear friend and now a couple of feet high.  I’ve also planted an amelanchier close by, which in time will bring colour in the spring and autumn.  And I have a tiny bird bath too.  It’s favoured by pigeons – which are totally out of proportion to its size and thus very comical, and also woodpeckers: I love to see them taking a drink with their long beaks!  Goldfinches are also visitors.  The majority of our many birds don’t seem interested but there is plenty of running water in the valley – and often plenty of puddles around – so I assume they are spoilt for choice!

3 thoughts on “August in the Garden: project no. 1”