While others talk of signs of spring, I’m still in the throes of winter.  I may be revelling in the birdsong and the sturdy, bright friendliness of the têtes a têtes; I may be delighted by the sight of scudding clouds in a bright blue sky and the clump of bashful purple crocus and the single bluebell I discovered this week (yes, really).  But I’m not yet ready to let winter go.   Shy pale primroses, shiny bright celandines and bold lemon and yellow daffodils have already burst upon the garden and the lanes here, and I welcome them.  But winter shall have her time in the spotlight too.

Spring sees the return of many things: colours brighten, life awakens.  Spring is brash and lively and in-your-face.  Spring bursts upon the stage and we welcome it with open arms and broad smiles and fill our lungs with fresh air redolent with bright promise; eager to turn our backs on the long stretches of grey, dreary days and dark evenings.  We grab at every small sign that life is renewing; that spring is on her way: that finally, finally, she has arrived.

Is there anywhere a definitive date when spring begins?  It would seem not.  Somewhere I have a traditional gardening and farming calendar which divides up the months in the northern hemisphere: early spring, mid-spring, late spring…  I remember being charmed by it; it seemed to fit the seasons more appropriately than conventional divisions.  But I can’t find it.  So I can’t determine whether it declares March to be late winter or early spring.  I like to think it’s the former, though I fully expect to be wrong.

On a more official level, the Met Office gives us two options for the beginning of spring.  March 1st sees the start of meteorological spring and is fixed for purposes of gathering and comparing data.  The seasons are split into four periods of three months according to the Gregorian calendar: as a result, spring runs neatly from March 1st to May 31st.  The dates of our astronomical seasons vary slightly from year to year as they take their references from the position of Earth’s orbit in relation to the sun.  Thus in 2017, March 20th is the first day of the astronomical spring: the day after the spring equinox, when once again the day is longer than the night.

I’m going for the latest possible date, so the earliest I am allowing spring to arrive here in this corner of Cornwall will be March 20th.  And since I have several wintry posts I’d like to include this year before throwing myself wholeheartedly into spring, I may have to make a fortuitous discovery of the missing traditional almanac and claim that March – the whole of March – is in fact late winter.  Until then, I’m keeping the spring photos at a muted level – I’m going to let the winter colours shine through for a while longer yet!

I think perhaps if our souls could be classified as seasons, mine would be winter.  Winter is often quiet; often subtle.  Winter is reticent; she doesn’t give up her secrets easily.  But those seemingly endless days of sombre grey and dismal cold mask treasures of their own.  I’ve always been drawn to northern climes and empty spaces: the essences of winter.

I know that here in the UK our winters are more usually defined by rain and darkness, damp and dreariness; sodden ground, cheerless dripping branches, and soulless sullen cloud-covered skies.  But there are other shades of winter and an afternoon in January gave up treasures of a different kind: an alternative wintry siren’s call that sang to me of seasons past.

This is Portwrinkle beach.  A low January sun turned the sea into liquid mercury. The waves rolled onto the shore, spume rose against dark rocks.  The ocean was restless, relentless, remorseless, pounding the beach: back and forth, back and forth.  Hypnotic.  Vast.  Eternal.  There were no wheeling gulls lamenting on the wing; and there were no people.

The winch – unused – stood stark against the sand and the dinghies were stashed well back from the water’s edge, awaiting warmer days.

These are the human colours of winter in Portwrinkle.  Nature herself was a symphony in shades of silver and pewter grey.

To walk along a harbour wall is always to walk with history.  Those strong stone structures that break the ferocity of the seas and encase a gentler haven within their stone arms have seen centuries of ships and men struggle, triumph, and occasionally perish in pitting themselves against the power of the waves.  Lives are lost in eking  out a livelihood or defeating usurpers or plotting paths to new worlds across the waters. All these stories and more were whispered and murmured as we gazed from Portwrinkle harbour.  It was necessary only to be still and to listen.  The view from here spoke of ghosts and spirits from ages past.

Portwrinkle’s harbour is tiny.  It’s unlikely that its men set forth to discover new worlds.  But like most of the local coastal villages, it will have seen boats come in under darkness bearing contraband, and it had a long fishing history which is now entirely gone.  The fish cellars have been incorporated into housing and the once flourishing pilchard industry is a footnote in history books.

Salting the fish at Sennen

Landing the catch at Newlyn

But even this small harbour retains the spirits and callings from its past. 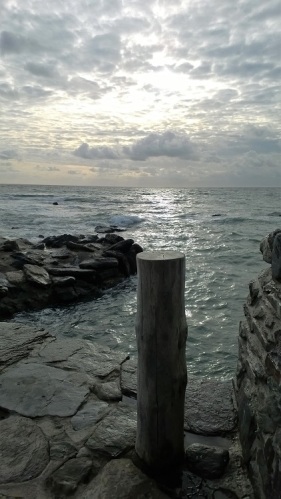 How many women stood here as I am standing, seeing this view that I am seeing, watching and waiting?

How many boats passed this point, their nets straining with fish to be salted by frozen fingers?

As I stand here I listen for the voices from the past, and the sea sings a wistful song.  Where is it going, this glistening mournful mercurial swell, where is it going?  And where has life gone?

On this gentle January day with its diffuse light and its gleaming heavens, the waters, the skies, the beach, the village are empty.

There is only us and the whispers of history in the wind.

In a couple more months, Portwrinkle will be filled with families enjoying the waters and the sandy beaches.  That now is the role that it plays; that is its place in the world.  In a few months.  For now I shall leave it to its quietude, and its murmurings; I shall leave it to its memories of winters past when the beach and the harbour were never deserted by fairweather crowds – because people’s lives depended upon it.

41 thoughts on “The View from Here: Of Winters Past …”