After all, I only get one crack at this next decade!

I’ve been in a dilemma.  I want to write a birthday blog yet why would anyone want to read it?  I remind myself that essentially one blogs for oneself.  But the purpose of publishing is that others should read what is published, and if there is an audience, then surely the audience deserves consideration.  And really – can I expect anyone to want to read about my birthday?  So with the subject matter made clear, feel free to move along if birthdays aren’t your thing.

This birthday has meant a great deal to me.  Despite none of it taking place in Cornwall, it deserves its place here because it marks a milestone and because it was rescued in a format quite different to how it was envisaged.  September saw the swallows swoop away to warmer climes and with them went my fifties.  A chapter closes; a new decade dawns.  I’m playing with clichés because among many other things, this birthday has made me very aware of the power of words: or more specifically, the ways of the mind in responding to words.

I have no problem in turning sixty, though a few weeks earlier I had found it remarkably disconcerting to contemplate my eldest child turning thirty-six.  And I find it almost impossible to acknowledge that I’ve now entered my seventh decade.  Ah, but age is merely a number!  I’m going to focus on that particular euphemism and let the rest go.

There was a lot of thought and day-dreaming went into this birthday, none of which, on my part, translated into concrete plans or productive action.  There were big ideas. “What would you like to do?” B asked me, back in January.  “I thought we might take a trip – perhaps to New England.  Your birthday is just the right time for New England in the fall.  And maybe on the day itself you’d like a party to celebrate with the family?”

How lucky am I!  I thought of a venue for the party: back in Sussex for the convenience of guests.  I envisaged an all-day affair with friends and family from near and far coming and going throughout the day and into the evening.  It was all going to be effortless: a feast of bonhomie and joyful celebration. The idea of New England slowly shifted further north and became Atlantic Canada.  Trains were involved as well as planes.  Autumn leaves were augmented by colourful coastal villages, dramatic beaches and sites of literary interest.  But none of it happened.  Ideas drifted before they became firm plans and instead became daydreams that hung for a while on wisps of summer air and blew away with the dandelion clocks.  As poor health persisted, it became clear that this wasn’t the year to expect grand plans to do more than remain as day-dreams.

If I want to emphasise a message here it must be that almost always it seems, the simplest things are the best.  Grand plans dissolved – and I had a wonderful birthday.  My darling daughter called about a month before the day to tell me that she and Steve would like to host something for me and who would I like to invite.  I kept it simple.  On my sixtieth birthday, the view from here in my daughter’s mid-Sussex garden, was filled with love.

Bernie and I travelled the day before and stayed at a pretty little inn where we had a celebratory meal on our own.

On the morning of my birthday we took flowers to my sister’s grave – a simple gesture and one I so rarely get the chance to do.  The sun was shining, the churchyard was beautifully tidy, warm and peaceful.  The cherry tree that had been little more than a sapling on the day of Karen’s funeral now spread it branches wide, casting soft dappled shade over her resting place.  As I sat on the bench close to her grave I was in contact with both my other sisters.  It was coincidental but it was fitting.  To me, birthdays are best with family. 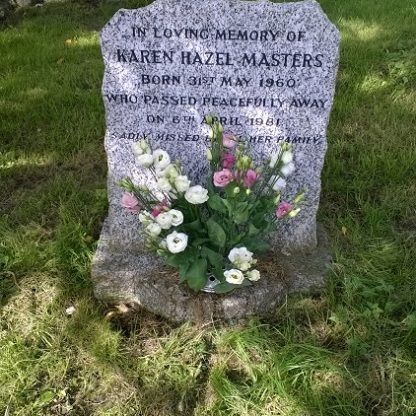 And it was a family effort at Ellie’s.  She and Steve had worked so hard.  They’d completed all kinds of projects in the garden in the hope that the weather would be kind enough to let us celebrate outside.  It was, and we did.  Her little boys played their parts by remaining on their best behaviour whilst Mum & Dad were otherwise occupied.  And my somewhat bigger boys played their parts running a taxi service, helping to set up and generally following orders. 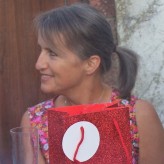 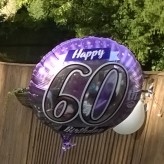 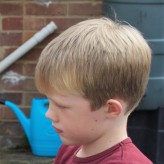 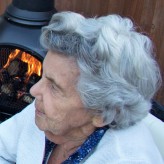 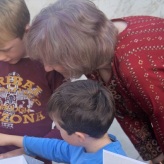 It was lovely.  We had music, laughter and conversation.  “This is great music,” I remarked.  Others of my generation said the same.  Steve smiled knowingly.  Spotify is helpful like that, apparently.  We had food, drink, balloons, candles and birthday cake.  Beautiful cards and thoughtful presents.

One part of my daydreaming did come to pass.  For me, the day was effortless.  I was entirely free to enjoy it all.  As I said earlier: how lucky am I!

There was plenty of hard work from everyone else, and my sister and brother-in-law moved heaven and earth to be able to join us.  Kent to Mid-Sussex – normally a trip taking under an hour – but on this occasion via Leeds University and their local A & E: a herculean journey of love.  Mum and Dad were collected and safely delivered, despite Mum nursing a heavy cold.  And Brenda, my delightful, diminutive ex-mother-in-law was on sparkling form despite the personal fears I knew she was facing.

I don’t need to wax lyrical about how much all this meant to me.  As a family we are frequently undemonstrative, but feelings run strong and deep.  We know.  To those involved, I say: thank you.

And New England in the Fall which became Atlantic Canada in the Fall has now become New Zealand in the Spring.  For B this will be a trip home after an interval of some years, and I’ll get to see his homeland, which just happens to be a country of breathtaking scenery, myth and good wine.  Trains will be involved, and beaches and mountains.  It will be wonderful.  And I’m still intending that one day we’ll get back to those plans for New England…. And New Brunswick…. And Nova Scotia….  After all, I only get one crack at this next decade!

66 thoughts on “The View from Here: when life doesn’t quite go as planned”