In a world of bustle and change there is always stillness

Outside, it has been a mild day: mild but moist.  The air scarcely breathes: a stark contrast to yesterday’s winds.  But whilst yesterday was wild and spirited, today seems damp and tired.  Listless.

As I approached the post box at the top of the hill this morning, I met Peter, our farming neighbour, and his son, Edward.  There was clear evidence on the road of their most recent task: the cows had been brought in.  Were they coming in for the winter?

Out of sight a cow bellowed mournfully.  If she has begun her winter incarceration, it will be many months before she and her sisters are once again on the valley slopes.  The view from here will have emptied.  Our view is never quite in harmony when the cows have gone.

I walked on without seeing a single vehicle, even on the top road.  The world was subdued today after the dregs of hurricane Ophelia.  Silent but for the angry clamour of a captive cow.

Bernie lit the stove this afternoon: the first lighting of the season.  It blazed richly, the colours contributing as much to the sense of heat as the flaming logs themselves.  The cats were fascinated.  Jackson watched the flames and the glowing logs for several long minutes.

The logs in the stove reminded me of the fiery leaves on the maple tree.  A day or so back, after an overcast day, the late-afternoon sun appeared and blazed brightly: lighting up this tree with such radiance that I was breathless and stopped in my tracks.  So many colours, such abundance, such life, such energy.

The recent strong winds have had little impact on the tree and its multi-coloured canopy, but today the light is once again dulled and the tree has stepped back, no longer centre stage.  The sun will come again, and I shall go out again and gaze at the fire in the tree’s branches until they inevitably disrobe and wait, naked and trembling, for Time to clothe them once again in freshest green.

Outside, the robin sings, after months of summer silence.  Its pure and plaintive song a farewell to the mellow months of sunshine; a forewarning of the shortening days, and a foretaste of what he will sing when the hours of light once more begin to lengthen.

And inside, we have the new yet familiar smoky smell from the woodburner.  It overpowers the scent lingering from the kitchen but I don’t mind.  I like the smell of the smouldering logs, and if I want to savour again the sweet spicy aroma that has been superseded, I need only to lift the cloth covering the mixing bowl.  I have been making mincemeat. 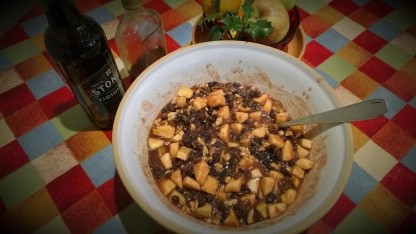 The peeling and chopping and juicing and pureeing happened this morning.  Under the cloth are fruits fresh and dried: absorbing juices, mingling flavours, enriched with the spicy scent of cloves, the pungency of ginger and the warmth of nutmeg.  Tomorrow comes the morning of gentle, almost imperceptible cooking; the stirring in of the ginger wine and the sloe gin and finally, the satisfaction of seeing a row of filled jars. 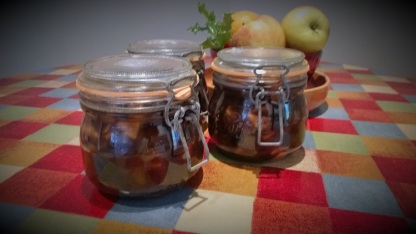 Making mincemeat is a therapeutic, gentle task.  It’s one of my favourite things – a ritual with added ingredients: a smattering of nostalgia, a sprinkling of anticipation, a dollop of love and a healthy dram of gratitude. 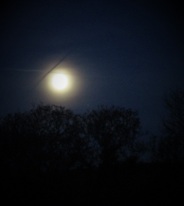 Outside again now, as I write, we have a single purple streak running along the top of the hills between their shadowy brooding mass and the expanse of the darkening sky.  The owls begin to call, as they will throughout the night; pheasants are startled and rise clumsily when roused.  Perhaps tonight, we shall glimpse the moon.

Indoors, the fire smolders.  In the bowl the mincemeat steeps.  And curled comfortably in their basket, drowsily dreaming, the cats sleep.

In this way, evening settles in.  And Time passes – on this extraordinary ordinary Tuesday in October.  The wind rises and falls.  The leaves glow and flutter softly.  The flames rise and fall, and flutter and splutter, and occasionally a cat’s paw flutters too, and flickers in some secret feline fantasy.

Yes, Time passes inexorably.  We talk warily of the speed with which it passes.  Yet it brings around again those small, much-loved rituals and happenings of a season – or indeed of a single day – which remind us that in a world of bustle and change there is always stillness.

Familiarity – if we permit it – can walk hand-in-hand with comfort.

54 thoughts on “The view from here: a Tuesday in October”