The view from here was much changed, but as ever, the passing of time has softened the blow.

This is a view of our field in the first summer we were here. 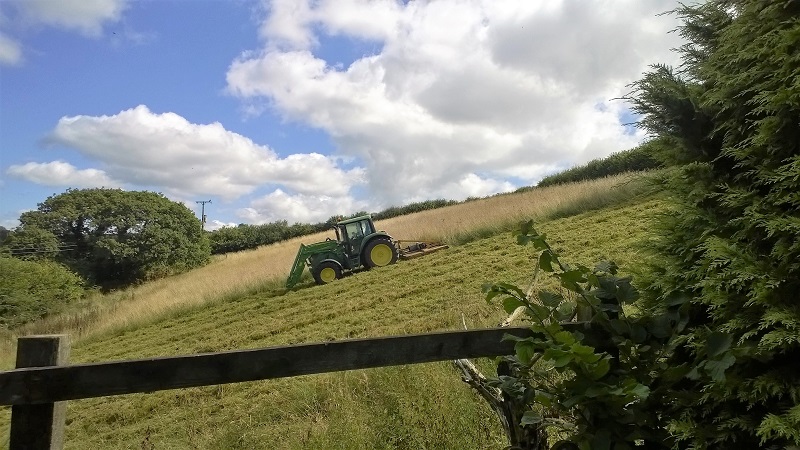 The tractor shows that the field is quite steep.

Bernie is watching the tractor; I include this shot to highlight the power lines and the oak tree just to his right.

Firstly, we heard that SW Electricity needed to cut the boundary hedge.  They are permitted to do this to prevent damage to the power cables.  Ho hum, it had to be done.  This, I could live with.

But it was a sad day when we heard that the oak had been condemned.  Proper procedures had been followed; the tree was diseased and posed a danger to the nearest property.  How sad to see a mighty tree go.  This time last year, it was reduced to this: 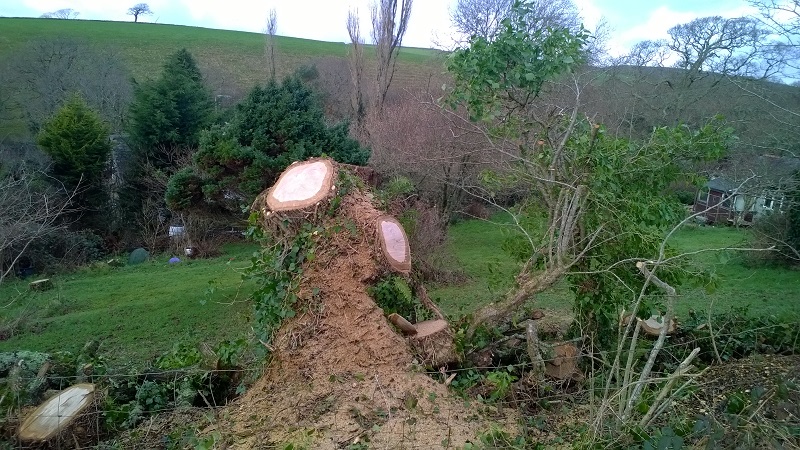 I could have cried.  To make matters worse, we got a call not long afterwards from Adam, who lives in the property behind the oak.  He’d been ‘trimming his hedge’ – which is shared with our field of course – and got carried away.  Losing the oak had brought a lot more light into his garden and encouraged him to chop down a few more ‘saplings’ and other slightly taller things which had been a part of the hedge but did grow on his land.  Only afterwards did he realise that he’d now completely opened up the sightline between us and them.  From our vantage point up the hill, we now look down into their garden.  Adam was genuinely apologetic: no doubt it’s impacted on their outlook too.  And the damage was done.

The view from here was much changed, but as ever, the passing of time has softened the blow.  What initially felt like a massive rent in our previously leafy privacy no longer feels so savage.  I still don’t like to look at what remains of the felled oak tree, but its loss in our line of sight no longer jars as it once did.

And we’ve moved on to thinking about how to make the best of what we’re left with.

Last week Nev, our ‘tree man’ was here for the day.  He’s officially an arborist and he knows his stuff.  He has a wonderful but very strong Cornish accent which I struggle with, and he’s rather hard of hearing, so conversation is interesting to say the least.  But he’s a lovely chap and has been so helpful.

The wind was fierce; the day was cold and squally.  The harsh conditions didn’t seem to bother Nev, who worked steadily, pollarding the line of ash trees which demarcate the garden and the bank.  Rather brutal – and another line of sight which is now much altered – but necessary, and the trees will have grown back within 3 years.

He also cut back the acer at B’s request.  At least I’ve always thought it was an acer.  After the deed was done, Nev referred to it as an ‘amber light’ – a sorbus (mountain ash).  I remain unconvinced, and can only hope that the treatment of an acer is the same as for a sorbus.  Beyond that, I’m saying nothing.  Here are some ‘before’ and ‘after’ shots. 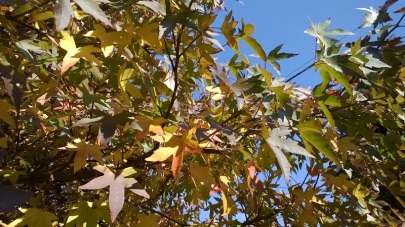 Instead, I’ll move swiftly on to more positive developments.  Nev also did some planting.  Bernie had the idea of a small orchard in the lower portion of the field.  We envisaged plums and cherries.  We imagined it established, breaking up the vista between us and the neighbours.  Then we learned from Nev that Cornish conditions do not suit fruit trees in general but that there are some apple strains which thrive here.  He got quite excited when I asked about including a couple of crab apples as well.  They will improve pollination, he told us; they will add colour in spring and autumn and they will encourage the wildlife.  We asked him to choose appropriate varieties.

We spent what felt like hours, but was really about twenty minutes, marching around in freezing conditions, shouting above the wind, playing chess with the saplings until they were positioned in such a way that all three of us were satisfied.  Bernie’s focus was on ultimately providing a screen from the neighbouring property.  Mine was to leave room for what I hope might eventually become the site of a wildlife pond, and Nev, thankfully, considered the more practical issues: the required distances between each tree and providing adequate space for the tractor when hedge-cutting time comes around.

How many apple trees constitute an orchard?  Do we now have the tiniest of fledgling orchards?  We certainly have the beginnings of a copse…. An apple copse? An apple thicket?  Though it must be said that one of the saplings can’t really be described as such: to me it’s simply a twig.  We have a copse of twigs and saplings.  But I am assured that all five will grow quickly.  The apple trees are maidens: they are one year old.  I have my doubts on quite how quickly they will reach a size that will have any impact, but I’ll be very happy to discover myself wrong. 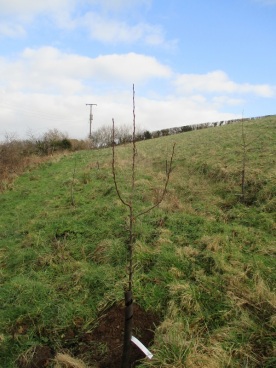 And meantime, I’m just delighting in the names of the apple varieties.

We have two crab apples: Golden Hornet, which we had in our previous garden, and Red Sentinel.  Both will bear fruits which will last on the trees well into the winter.

The first is an eater named Cornish Gilliflower.  Here’s what I’ve learnt about it:

A very old variety, brought to notice by Sir Christopher Hawkins in 1813 having been discovered in a garden in Truro, Cornwall in about 1800. The word Gilliflower is believed to have been derived from the old French word Girofle meaning clove and given to this variety because it is supposed to have a clove-like fragrance when cut.  Medium to large-sized, rather unusual irregular oblong or oblong-conical shaped fruit. The knobbly exterior is quite boldly ribbed and distinctly five crowned. The skin is rather rough, often with some russetting, greenish-yellow with up to half flushed orange-red. Very firm yellow flesh, tinged green around the core. Rather dry but sweet with a melon like fragrance.  Moderately vigorous, very spreading tree. It is a tip-bearer and unsuited for training into restricted forms such as cordons and espaliers. A light cropper.

Next we have Cornish Aromatic:

Fruit, above medium size, three inches wide, and two inches and three-quarters high; roundish, angular, slightly flattened, and narrowing towards the eye. Skin, yellow on the shaded side, and covered with large patches of pale brown russet, which extend all over the base, and sprinkled with green and russet dots; but of a beautiful bright red, which is streaked with deeper red, and strewed with patches and dots of russet on the side exposed to the sun. Eye small and closed, with long flat segments, which are reflexed at the tips and set in an irregular basin. Stalk short, inserted in a deep and narrow cavity which is lined with russet. Flesh, yellowish, firm, crisp, juicy, rich, and highly aromatic. A valuable dessert apple of first-rate quality, in use from October to Christmas. The tree is a free grower and an excellent bearer.

And finally a cooker/cider bearing the wonderful name of Colloggett Pippin.

Colloggett Pippin is a very popular Cornish variety from the Tamar Valley, dating back to the early 1920s. It is a dual purpose sharp apple and makes a very good dry, light cider. The apples are large and striking in appearance; pale yellow, angular and with bold red stripes. Also known as Cornish Giant, trees are spreading and produce regular crops. When cooked, Colloggett Pippin turns to a brisk gold puree, perfect for a proper Cornish apple sauce.

Who knew the language of apple trees could be so beguiling?  I’m now totally in love with the romance of our baby apple trees and shall be watching over their progress like a mother hen.  And who knows, maybe we’ll be wanting a cider press soon!

36 thoughts on “The View from Here: the maiden apples and the mighty oak”