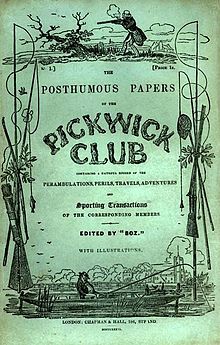 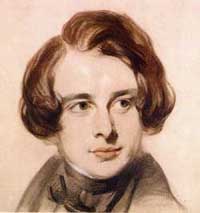 (Reviewed as part of The Classics Club Challenge)

I didn’t intend to work my way through Dickens’ catalogue but that seems to be what I’m doing.  And although I initially included just a couple of his novels on my Classics Club list, I plan to add more, starting with Dickens’ first published novel: The Pickwick Papers.

Originally serialised between March 1836 and November 1837, with Dickens writing under his pseudonym, Boz, it was published in book format that same year and was the first of what would become Dickens’ canon of fifteen novels.  At the time of publication, Dickens was just 24 years old.

The Pickwick Papers was originally published with the imposing title of:

The Posthumous Papers of the Pickwick Club, Containing a Faithful Record of the Perambulations, Perils, Travels, Adventures and Sporting Transactions of the Corresponding Members.

I’m pleased it’s been shortened, although the original epithet does provide an accurate representation of what the book is about. 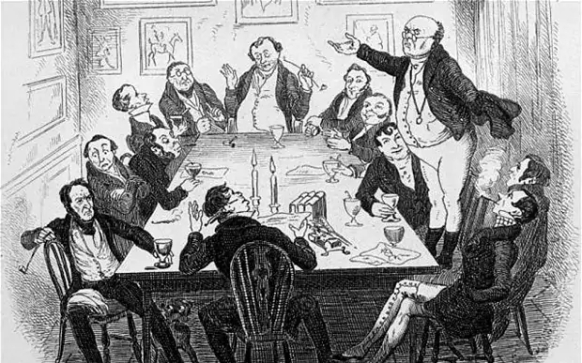 Reminiscent of earlier picaresque novels such as Don Quixote, the story is tenuous and episodic.  Samuel Pickwick is perpetual president of the club that bears his name and it is proposed that he and three fellow members of the club venture out of London and report back to their fellows on their experiences.  What follows is a saga of their misadventures, most of which are absurd and/or amusing. 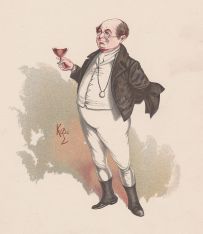 Pickwick himself is a lovable character; I warmed to him very quickly.  He may appear pompous and frequently foolish, but he’s an innocent: a man who thinks well of everyone whenever he can.  He is generous, benevolent and genuinely tries to do what he believes is best for his friends and acquaintances.

His three companions: Tracy Tupman, Augustus Snodgrass and Nathaniel Winkle pale in comparison to the glorious Pickwick but are essential players in the catalogue of adventures and misadventures that make up the book. 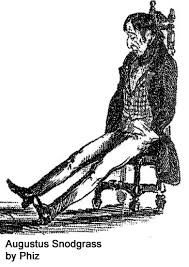 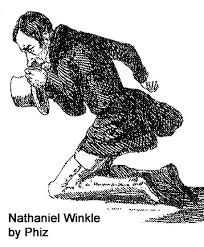 It is the introduction of Sam Weller however, in chapter 10, which caused sales to soar. Sam is introduced as an affable cockney who can turn his hand to most things.  Mr Pickwick engages him as a servant.  His loyalty is unswerving and by the end of the book he is Pickwick’s close friend.  Sam is shrewd and knowing; experienced in the world.  He contrasts perfectly with Pickwick’s innocent bumbling. 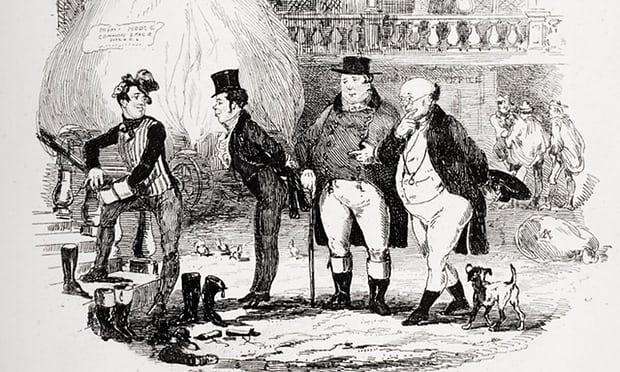 There is also Mr Jingle, whom we meet almost as soon as the intrepid travellers set off.  Mr Jingle was my first real introduction to the vast array of characters that Dickens will create over his career.  I’ve encountered others of course, but without fully appreciating Dickens’ craft and creativity.  Dickens gives a vivid physical description of Mr Jingle when he first appears but it’s his remarkable manner of speaking which really makes him jump off the page.

“Heads, heads – take care of your heads”, cried the loquacious stranger as they came out under the low archway which in those days formed the entrance to the coachyard. “Terrible place – dangerous work – other day – five children – mother – tall lady, eating sandwiches – forgot the arch – crash – knock – children look round – mother’s head off – sandwich in her hand – no mouth to put it in – head of family off – shocking, shocking. Looking at Whitehall Sir, – fine place – little window – somebody else’s head off there, eh, Sir? – he didn’t keep a sharp look-out either – eh, sir, eh?” 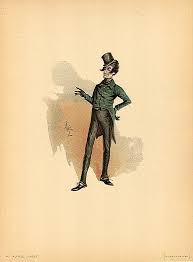 Jingle is a trickster, a con-man, albeit frequently a loveable one.  He and Pickwick cross paths regularly as their adventures unfold, each at times gaining the upper hand.  Ultimately, it is Pickwick who supports Jingle through a very difficult predicament and generously sets him on his feet again.

Jingle is just one of the cast of characters that I enjoyed.  Even those playing very minor roles such as the sleepy fat boy, Joe, are memorable.  I found Sam Weller’s father, Tony, very endearing for all his faults, and Mr Wardle of Dingley Dell gives us a foretaste of books to come when he invites the Pickwickians to spend Christmas with his family. 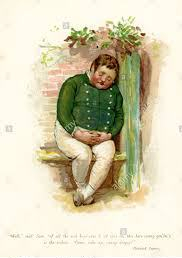 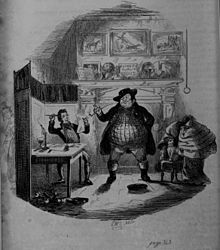 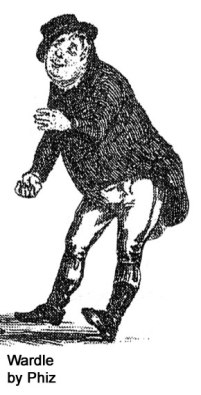 There are very few moments in a man’s existence when he experiences so much ludicrous distress, or meets with so little charitable commiseration, as when he is in pursuit of his own hat. A vast deal of coolness, and a peculiar degree of judgment, are requisite in catching a hat. A man must not be precipitate, or he runs over it; he must not rush into the opposite extreme, or he loses it altogether. The best way is to keep gently up with the object of pursuit, to be wary and cautious, to watch your opportunity well, get gradually before it, then make a rapid dive, seize it by the crown, and stick it firmly on your head; smiling pleasantly all the time, as if you thought it as good a joke as anybody else.

Later in the book, the Pickwickians embark on a shoot – with some misgivings considering that none of them are serious sportsmen.  Mr Pickwick is temporarily lame, but very much wishing to accompany them he agrees to being pushed along by Sam in a wheelbarrow. What follows (chapter 19) had me laughing aloud. 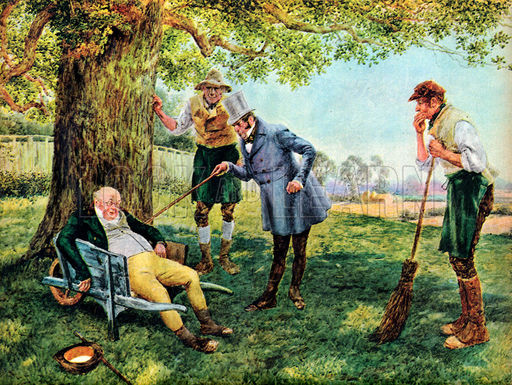 There is of course, light and shade in the book.  Not every scene is witty and whimsical, and there are some dark chapters in Fleet Prison.  There are also peaks and troughs in the writing and plotting.  Occasional chapters and sections of the book dragged, and the already tenuous tale meanders off in unwarranted directions more often than I would have wished.  (Cannily adding another episode or two to the serialisation no doubt.)  But always the pace quickens again.  The dialogue remains bright and original: the whole book is enlivened by Dickens’ ability to bring his characters to life through their own words.

Dickens must have had enormous fun putting these vignettes together.  Even at this early stage in his career, his sense of the theatrical is very evident.  The book is brimming with life: overflowing with ebullience, innocence and warmth.  I wish I had first come to it several decades ago.  That would have given me more opportunities to read it again, and were I to do so, I know I’d find it just as funny and discover much that I missed first time around.

The spirit of The Pickwick Papers was replicated in many clubs and societies that were formed in the wake of the book, with Dickens’ endorsement.  In Little Women, by Louisa May Alcott, published in 1868, the March sisters have their own Pickwick Club and take on the names of Dickens’ club members.  The word Pickwickian stands in its own right, and a medical condition is known as Pickwickian Syndrome, drawing on Mr Pickwick’s well-known portly bearing.  With his first published novel, Dickens introduces a storyline and most specifically, characters, that remain alive in our minds today regardless of whether we’ve read the book.

Reading a little more about Dickens in the course of putting together my thoughts on Pickwick, I learned of the controversy that surrounded its birthing.  I learned more of the young man whose name was to be made by its publication.  I already had some background of Dickens the writer and Dickens the man, but this controversy was new to me.  I’m left wanting to know more.  I still plan to read his books (including a re-read of the dreaded Hard Times, which was my first serious introduction to Dickens and put me off reading anything beyond A Christmas Carol for a very long time).  But more than ever, I want to read more about Dickens himself.

Charles Dickens: a life by Claire Tomalin, which seems to be the current definitive book on Dickens

Dickens: abridged by Peter Ackroyd, perhaps superseded by Tomalin’s work, but maybe worth a look via the library

Death and Mr Pickwick by Stephen Jarvis, a novel which focuses on the controversy surrounding the origins of Pickwick

29 thoughts on “The Pickwick Papers by Charles Dickens”