Time to move on in the alphabet; it’s now the turn of D, E and F.  All six from the first two lists of those I own and those I don’t have been read (with Christmas and various other books threaded in between).  And the close contender which just missed the cut for ‘B’ in those I don’t – The Birdwatcher by William Shaw – is being read this week.

D is for Devoted Ladies by Molly Keane

This is another of my green Virago Modern Classics which I’ve owned for years and never read.  And I admit to being wary.  It’s one of Molly Keane’s earlier novels and she’s known best for those written at the end of her career. Reviews I’ve read seem strongly divided and I’m far from convinced this book is for me.  ‘Biting satire’ and ‘black comedy’ have been used to describe this book and both are generally descriptions that make me turn away.  I’ve become much stronger now when it comes to abandoning a book that isn’t working for me and I wonder how far I shall get with this one.  But I’ll never know unless I try and I take heart from Wikipedia:

Keane loved Jane Austen, and like Austen’s, her ability lay in her talent for creating characters. This, with her wit and astute sense of what lay beneath the surface of people’s actions, enabled her to depict the world of the big houses of Ireland in the 1920s and 1930s.

Hester was a creature whole in herself.  She sapped no strength from anyone. Her many sad failures and unsuccessful ventures in life were her own.  She leant on nobody.  Hester was indeed a bold adventuress.  When she was still quite young she had adventured what money she had on schemes and enterprises so speculative and unsteady that now she had no money left and was in the unenviable position of an old sister living upon a younger – living but not leaning.

E is for East of Eden by John Steinbeck 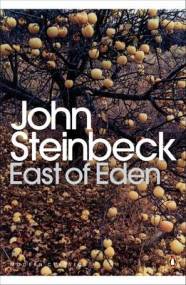 This will be my third Steinbeck.  Described in the introduction to my Penguin edition as “Steinbeck’s other big book”, I have been looking forward to reading it and I’m delighted that it’s finally going to happen.  I remember picking up The Grapes of Wrath many years ago and being mesmerised by its opening pages.  But I got no further.  I can only assume I picked up the book when on holiday or at someone’s house.  I still don’t have a copy of The Grapes of Wrath, but I have every intention of reading all of Steinbeck’s major works, so I’ll get to it eventually.  Meanwhile, it will be East of Eden, which Steinbeck considered to be his magnum opus.  I know there are critics; I know there is violence.  But I also know Steinbeck uses the book to describe his beloved Salinas Valley and I have been entranced in the past by his descriptions of this place as much as by the richness and simplicity of his writing.  This book has a lot to live up to for me.  I hope it won’t disappoint.

Ordinarily both Faye and Kate had their supper at the long table in the dining room, but on Sunday nights when Alex was off and the girls dined on thick sandwiches, Kate served supper for two in Faye’s room.  It was a pleasant and ladylike time.  There was always some little delicacy, very special and good – foie gras or a tossed salad, pastry bought at Lang’s Bakery just across Main Street.  And instead of the white oilcloth and paper napkins of the dining room, Faye’s table was covered with a white damask cloth and the napkins were linen.  It had a party feeling too, candles and – something rare in Salinas – a bowl of flowers.  Kate could make pretty floral arrangements using only the blossoms from weeds she picked in the fields.

F is for Freud’s Alphabet by Jonathan Tel

Jonathan Tel has a PhD in philosophy of science and his MS is in theoretical physics.  He studied cosmology with Stephen Hawking.  I came to hear of him when he won the Sunday Times short story prize in 2016 for The Human Phonograph.  Here is a man highly educated in subjects I know almost nothing about, with a prize-winning story that I never got around to reading.  But at the time I was reading A Fool’s Alphabet by Sebastian Faulks, and I’d recently read Where Three Roads Meet by Salley Vickers, set in 1939 and in which Freud is a character.  And lo – I find I have bought myself a copy of Tel’s book: Freud’s Alphabet! Oh dear….

1939.  Sigmund Freud has fled from Vienna to London, bringing his famous couch, his collection of tribal totems and his determination to free the subconscious. Accompanied by his faithful biographer and physician, Jones, he ventures out into the city of Virginia Woolf, and T. S. Eliot…

This is the encouraging part of the blurb: things get very peculiar after this.  But it’s a short book, and I feel that having rashly bought it, I ought at least to give it a try.  And I am just a little bit curious.  Plus, it’s the only book I have for ‘F’! I may be pleasantly surprised, though I’m not holding my breath.  And I am reminding myself – as with my choice for ‘D’ – that I don’t have to keep on reading…

Sunlight infiltrates through a gap in the clouds, revealing the houses, their dark green or dark red roofs, the lightning conductors, the chimney pots arranged in rows like organ pipes, or separately like the various items on a tea tray… The sky shifts and the sun cuts out.

The suburb is hardly disturbed.  It could pass for peaceable enough.  A team of middle-aged Central Europeans is working its way along Fitzjohn’s Avenue.  The local council employs refugees as painters: their job is to whitewash the base of the trees – pollarded planes, mostly – so that no one will crash into a trunk during the blackout.

With my first trio of books for A to C, I finished the post feeling enthused and anticipatory.  The feeling at the end of this one is rather more subdued!  But nothing ventured…

With thanks to Margaret at Books Please, whose own series of posts on this theme encouraged me to tag along.