We have sunshine.  I took a longer walk than usual, striding along the top road with the warm wind in my hair, skylarks singing in the heavens and solitary seagulls hanging at jaunty angles against the clear blue sky.  I checked the wires for newcomers.  The wires were empty.  Soon, I thought.

As I got home, it came to me: might it be warm enough for what has become an event of annual significance?  I stood and sniffed the air, palms upmost, considering.  Yes, it might.  And indeed, it was.  The clock was already nearing five, but it was definitely warm enough to sit for a while outside, under the blue sky, and breathe in the springtime.

A pot of tea, a pile of books and a curious, contented cat.  What could be better?  For the past two summers I have sat outside in this spot, always with Harri for company but now she is gone.  And with no prompting, Jackson has taken her role in this small ritual.  His presence fills me with gratitude and gentle memories. 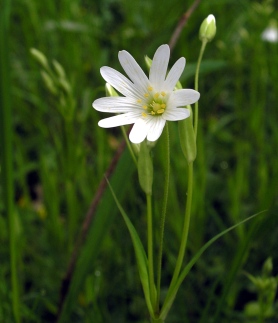 Which book?  Should I continue with The January Man?  I’m reading a chapter a month, since the book is structured as such.  Christopher Somerville writes of a walk every month – somewhere in the UK – and as he walks and writes, he describes the countryside  that he passes, bringing nature alive, and he muses on his relationship with his late father.  I’m finding it a delightful book: beautifully written; poignant, tender and enlightening.  I began April’s chapter last night and it’s my favourite chapter of the year so far.  Stitchwort is abounding on his walk – and also on mine.  I feel connected to this book.

Or perhaps I shall begin Rebecca?  I have the new Virago edition, produced in celebration of the 80th anniversary of the novel’s publication.  I’m eager to start it, despite having read it several times before.  I’m eager to read this edition – as if it will make any difference to the tale itself.  The anniversary is next month, and the Fowey Festival, which celebrates Daphne du Maurier’s life and work, is also next month.  It’s the right time to begin this edition of Rebecca.

But I decide on the Dickens.  Not Charles, but his great-granddaughter, Monica.   As a child I loved her books but I had no idea of her literary connections and it would have meant nothing had I known.  I’ve never read anything of hers since then.  But I plan to read one of her adult novels in time to write about it for her birthday on 10th May  and I chose – at random since I know so little of her adult work – The Winds of Heaven.  I have it here on the table, along with the other two books under consideration: a dove-grey Persephone edition with beautiful end papers and pages smoothly white and enticing.  I have come late to Persephone and I think I may now be addicted.  There is so much pleasure to be taken from simply holding a Persephone.  This is the book I pick up.

Tea poured, cat curled on a cushion, birds singing, wind soughing softly, I open the book and begin.  I discover, to my great satisfaction, that from the very first page the book is light and witty and sharply observant and what’s more – it opens on a windy afternoon in April!  This is absolutely the day to get reacquainted with Dickens’ great-granddaughter.

I am settled.  All is peaceful for some while.  Tea is drunk; cat is petted.  Inner smiles and chuckles bubble merrily as I turn the pristine pages.

What made me glance up at that moment?  Who knows.  I imagine though, that I caught a flash of movement above.  I glanced up and there it was.  A single solitary and somewhat bemused swallow.

I cannot say, as I have in previous years, that ‘the swallows have come’ because so far there is just the one.  It hovered, seemingly uncertain.  No aerial antics; no swooping curves and soaring arcs; no chittering on wire and rooftop.  Just this one solitary swallow with its forked tail and its plump white breast, its dark wings and rufous throat.  A single swallow who seemed in that moment, to be regarding me just as I regarded it.  A tiny pause at the end of an arduous journey across land and sea; a tiny pause in which we each observe the other, and perhaps an instinctive recognition that the swallow is home for the summer.  The vanguard, leading the way for its fellows.  For underneath where I sit, on the elevated decking, last year’s crafted nest is waiting.

The sunshine has come; the swallow has come.  Though there will of course, be grey days and wet days, I am confident in saying with the swallow, spring has come to Cornwall.

The view from here on this soft and mellow April afternoon has been filled with small and simple joys.  And I am content.

44 thoughts on “The View from Here: on an afternoon in April”