As I researched the details of what happened at Aberfan, I realised this was a historical story with a deeply urgent contemporary resonance: a story of what can happen when a community is run by a corporation.
(Owen Sheers)

On Friday 21st October 1966 a slag heap shifted.  It slid inexorably towards a small mining village in South Wales, destroying several houses and at least one farm.  The worst hit building was Pantglas Junior School.  In total, 144 people were killed.  116 of them were children.  The name of the village was Aberfan.

I remember this disaster; I was a contemporary of the children in that school.  I remember the shock waves and the disbelief and later, the country’s sadness.  I would have been nine years old. 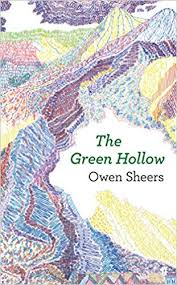 I connected none of this with the only book held in my library by Owen Sheers: The Green Hollow.  A few years ago I had read another of Sheers’ books, Resistance: a sensitive, lyrical, romantic, dystopian novel, which imagines the aftermath in a remote Welsh valley after Germany had invaded Britain.  It has stayed with me.  I can’t decide which genre it belongs in or even whether I liked it or not; I thought I might read it again for Dewithon 19 and get a clearer perspective.  But this is a different library and it didn’t hold Resistance.  It did have The Green Hollow: a book by a Welsh writer about a Welsh tragedy.  The die was cast.

On his website, Sheers is described as novelist, poet, playwright.  The Green Hollow – which is the English translation of Pantglas, the name of the school – is described elsewhere as a ‘film poem’ – a fusion.  Sheer’s other works suggest his art is marked by this fusion of genres and mediums.  The Green Hollow was commissioned by the BBC to commemorate the 50th anniversary of the disaster in Aberfan in 2016.  I didn’t see the resulting programme when it was broadcast at that time.  It won the BAFTA Cymru Award in 2017 for best television drama and for Sheers as best writer.  Having read the book of the poem, which was published in 2018, I felt compelled to watch the drama itself the following day.

Book, poem, drama – however one describes or comes to this work, it is equally powerful.

Sheers presents the work in three parts but always as a series of voices.  The children and parents: speaking at that time and speaking today; the rescuers: some called in and others who happened to be there at the time; and the survivors.  In this final section he includes those who were there – speaking in the immediate aftermath and speaking today – and he also includes voices from those who did not live in Aberfan then but have arrived since and form part of the community that lives there now.

The first part of the poem, ‘Children’, creates a picture of the village as it wakes up on that foggy October morning.  It takes us to the moment that the avalanche hits:

But then it got louder than thunder ever can.

I looked out the window, saw Jack-the-Milk,

Then – and I still don’t know why,

I had no time to think –

I put the book I was reading over my head.

Seconds later, the darkness came in,

As if all the eyes in the world, had chosen then to blink.

The middle section, ‘Rescuers’ introduces voices from outside the families, people who happened to be in the area or were called in as events unfolded.  These are the words of Sam, a young journalist:

I had my notebook and my pen,

but I couldn’t take them out.

So instead, I climbed up on to it,

that mass of underground waste,

and joined a chain

passing back buckets of slurry.

It was only after a bit that I noticed –

it was still moving.

The whole dark body of it,

a slow buckle and seep

hard but supple, flexing under our feet.

It was beginning with the idea of voice – of giving Aberfan a voice – that led me towards the style of the piece, a form of verse drama created from first person accounts; a series of rhythmically driven dramatic monologues underpinned by internal and line-end rhyme and half-rhyme.

In this he succeeds brilliantly.  The language used is simple and clear, the rhythms and rhymes flow without effort.  The impact of the subject matter is all the more powerful through the simplicity of the voices.

I remember, for example,

the one appointed to me, he’d say

My birthday! How could he have known?

There was no worse thing.

I’d been looking forward to mine,

Twenty, thirty friends at a party.

But when the date came

there were only three, four of us about,

and that’s when it really sunk in.

My friends, they’d been wiped out.

There is a lengthy but fascinating piece by Sheers here, in which he talks about his concerns over taking this commission, how he went about it and what he wanted to achieve.  It’s worth a read.  Another quote from that article:

Was it possible, then, to create a piece for TV marking the 50th anniversary of the collapse of tip No 7, while also attempting to broaden the field of vision in respect to the village? To paint a portrait not just of what happened, but also of what was lost? What was Aberfan like in 1966? What were the interests of the people, the social life, the sporting obsessions, the bands of the day? What was the deeper history of the place? Why had it become the mining village it was, and what had it been before the discovery of coal under its soil? Perhaps most significantly, what was Aberfan like today? What other influences beyond the disaster have shaped its contemporary character, and how do those who call it home with no connection to the disaster view the village and the area now?

Sheers addressed all these questions.  He also had reservations regarding the impact on the present-day residents of creating such a piece:

Perhaps most significantly though, as a writer, I sensed a destabilising tension at the heart of the endeavour, between the dramatic need to take an audience into the unflinching core of the story and the potential, in so doing, for emotional exploitation at the cost of those who had lived and lost through the disaster.

I have my doubts too, about trying to do justice to Sheers’ work and about appropriating the tragedies of those involved.  In that respect, I have not used photographs.  I could simply say that I found the experience, both of reading and of watching, deeply moving; that Sheers’ work was for me, a tour de force.

But there is another element to Sheers piece, and to the story of Aberfan, which – to use Sheer’s phrase – gives it a frightening ‘contemporary resonance’.  Sheers brings much of this into the final part of the poem, though he flags it earlier, through the children’s voices, just seconds before the clock stops.  We hear about the wider picture.

The tragedy of Aberfan is magnified by the knowledge that serious concerns had been raised about the safety of the tips some years before.  Nothing was done.  It is difficult to stomach the attitude of what was then the National Coal Board.  The tribunal appointed to enquire into the disaster noted: “much of the time of the Tribunal could have been saved if … the National Coal Board had not stubbornly resisted every attempt to lay the blame where it so clearly must rest—at their door”.   It also stated that it was their: “… strong and unanimous view … that the Aberfan disaster could and should have been prevented.” The Coal Board was not prosecuted and no staff were demoted, sacked or prosecuted.  At the tribunal the local MP testified that he had long held concerns that the tip “might not only slide, but in sliding might reach the village”; he added that he had not spoken out because he had “more than a shrewd suspicion that that colliery would be closed”

I am left with the question: which is more important – human lives or corporate business?  Tragically, frustratingly, unbelievably, it remains a question we continue to ask today and all too often we hear the same answers.

It doesn’t take long to read The Green Hollow.  It’s not a comfortable read but for me certainly, it was a seminal read.  I am very glad to have read it, to have watched it, to have learned more about the aftermath.  I am saddened by this needless loss of life,  sickened by the behaviour of high-handed corporate bosses, uplifted by the strength and resilience of the people of Aberfan and indebted to Owen Sheers for using his skills and artistry to commemorate this dark moment in modern Welsh history.

Aberfan seems to have been left unmarked by any British poet laureate … Fifty years on, Owen Sheers has finally offered the tribute due from a laureate.

It is Mother’s Day in the UK tomorrow.  I give the final word to a mother as she saw her child off to school:

And that’s how we said our last goodbyes,

with all the luxury of easy time.

But it was already draining,

already moving, pressed to a shifting

under the weight of its own black hand.

And under it, on their way to school,

33 thoughts on “The Green Hollow by Owen Sheers: How to talk about it”