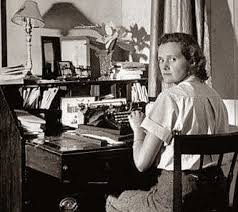 Recently I watched an interview with Daphne du Maurier by Wilfred De’Ath, filmed at her then home, Kilmarth, in 1971.  (It’s available on i-player at the time of writing.)   Daphne would have been in her mid-sixties.  Acerbic, dodging questions that she appeared not to have heard; frequently leading the agenda; her clipped diction betraying her wealthy roots, and yet all with a charm and a wicked twinkle in her eye; she was a force to be reckoned with.  In the course of the programme she reveals her archive room.  Manuscripts, letters, diaries… she rifles through it all, including the original manuscript of Rebecca.  I imagine that her early diaries were there too, and they are a resource she uses a lot when she comes to write Myself When Young some five years later.  Watching that programme was perfectly timed: here was the real Daphne in her sixties, outspoken and brittle as I would expect, just as I was about to read how the young Daphne came into being, and how she learned how to earn her living from her pen.

In her forward in my Virago edition, Helen Taylor tells us that this is the first volume of an intended autobiography.  It turned out to be the only volume.  Countless books have been written about du Maurier since, and she did publish various essays and short pieces pertaining to episodes of her life, but there was to be no volume two.  It doesn’t surprise me and I wonder if she ever envisaged another volume.  In her Author’s Note, Daphne states that: ‘All autobiography is self-indulgent’.  She remarks that her short-term memory is fading but that she vividly recalls her younger years, brought back to her no doubt, as she was reading through her diaries, written between the ages of thirteen and twenty-five (when she married).

Daphne explains, still in the Author’s Note, that in writing this volume, she hoped it might answer those who wondered about what made her ‘choose writing as a career’ and perhaps offer encouragement to those just starting out.  Maybe this was her way of justifying this book to herself.  The book had a more specific purpose and pertained to a specific period: memoir, rather than autobiography.  Originally, she called it: “Growing Pains: The Shaping of a Young Writer”.  Allegedly her American publishers disliked this title, claiming that it ‘suggested the ‘pains’ of adolescence and especially menstruation’. (Helen Taylor’s forward p.viii)  With its new title – Myself When Young –  the book now sounds explicitly autobiographical; I’m unconvinced that this reflects Daphne’s intentions.

“The child destined to become a writer is vulnerable to every wind that blows.  Now warm, now chill, next joyous, then dispairing, the essence of his nature is to escape the atmosphere about him, no matter how stable, even loving.  No ties, no binding chains, save those he forges for himself.  Or so he thinks.  But escape can be delusion, and what he is running from is not the enclosing world and its inhabitants, but his own inadequate self that fears to meet the demands which life makes upon it.”

I hear her.  The child destined to become a writer retreats from the real world into the world of her imagination. 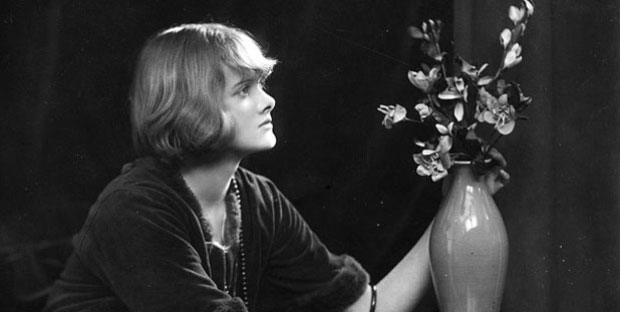 Myself When Young was to be published to coincide with Daphne’s seventieth birthday and it was written with considerable reluctance.  Life had changed since the days of the 1971 interview.  Daphne was living alone at Kilmarth and had become even more reclusive.  There were several situations in her family that were giving her cause for concern.  She was struggling with a fictional block and her mood was at a low ebb.  She had very little interest in baring her soul for the edification of the public.  Her best-known biographer, Margaret Forster, claims that it is astonishing that the memoir has such a light tone, given Daphne’s depressed state.  And having read it again for Ali’s Daphne du Maurier Reading Week, I agree.

Daphne came from a well-known and wealthy family, middle daughter of renowned actor Gerald du Maurier.  They were the celebrity glitterati of the day: famous figures were constantly in Daphne’s orbit from J M Barrie to the then Prince of Wales.  As a child she was very uncomfortable in company and although in later adolescence she came to enjoy the exalted circles in which she moved, she always craved her own company more and retained her intense need for solitude.  She reveals a lot in this short book and she does so with a lightness of touch and a sense of fond amusement.  I felt a warmth, a sense of self-compassion perhaps from the older Daphne towards her younger self,  as she looked back and viewed herself through her diaries and her memories.  I also felt her account to be open and revealing.  (It’s some while since I read Forster’s biography so I accept she may have plenty of evidence to the contrary which I’ve now forgotten, empathising as I do with Daphne’s memory problems!)

As an established novelist, Daphne is known for her acute sense of place.  The importance of places, and houses in particular, is very apparent from this memoir.  Her childhood homes are vividly evoked as is Paris, a city she adored.  And of course, Ferryside, the Cornish holiday home and indeed, Menabilly, the house she fell in love with and would later rent as her own home for many years.  Daphne discovers Menabilly during the years covered in Myself When Young though it would be some time before she acquired it for herself.  There are several instances of events and places in these early years which will later prove significant.

The importance of family is established early, a theme which will run through a lot of her work.  She adores her father (less so her mother) and absorbs his stories of his own father, himself a known published writer.  It’s unsurprising that Daphne and her sisters began performing their own plays from a young age.  Peter Pan was an especial favourite, given the family’s close connection with J M Barrie, and Daphne always played Peter.  Her interest in male roles and the male persona developed early.  In adolescence, we hear about her alter ego, Eric Avon, and the games she devised, roping in her younger sister, Jeanne, and friend, to play the supporting roles in Eric’s adventures.

“We are none of us isolated in time, but are part of what we were once, and of what we are yet to become, so that these varied personalities merge, become one in creative thought”

She tells of her crush on Mlle Fernande Yvon, one of her teachers at her Paris finishing school and with whom she maintained a strong friendship until Fernande’s death.  Her cousin Geoffrey, aged 36 to her 14 years, flirted with her dangerously when Daphne was still far too innocent to understand, and she reveals her growing awareness of his intentions with affection and increasing exasperation as she begins to see him for the handsome but weak man he really is.  The book ends after her whirlwind romance and marriage to Major Tommy ‘Boy’ Browning, the handsome soldier who sailed to meet her having read ‘The Loving Spirit’.   Daphne states:

“So the rapid courtship began, and Growing Pains is not the place to describe it.”

In this, she may have been demonstrating her infamous love of privacy – her married life was something she had always chosen to keep private – or she may have been focusing resolutely on what she saw as the intention of the book: to recount her development as a young writer.  And in the latter respect she succeeds admirably.  Having finished the book, I felt I understood her passionate need to be independent, to tread her own path and to earn her own living despite her wealthy background.   It is notable that she refers to writing as a career and she remained the main breadwinner in the family throughout her marriage.  She recounts how she was already writing the second novel (I’ll Never be Young Again) before The Loving Spirit was published; she had had the story in her mind for some time.  Like most writers, she squirreled away snippets of life: faces and places, small incidents, which resurfaced to become things of significance many years later in her books.  (As she was writing The Loving Spirit, a ship hit rocks in Pridmouth Bay.  Daphne crossed the river and viewed the distressed vessel from the shore.  She uses that scene many years later when the ship flounders in Rebecca.)  She suffered from crises of confidence, again akin to many writers, but surprised me in describing how immersed she became during the writing of a novel, only to slough it off immediately it was done.  For Daphne it seems, it is the process that’s important rather than the product.

I found Myself When Young a delightful read: insightful and engaging.   I also know that there is lot more to her enigmatic and complex character than revealed in these early years.  Her marriage, her children, her friendships; her writing and her fame: each conflict with her personal need for solitude and privacy.  I’m tempted to re-read Margaret Forster’s 1993 biography, ‘Daphne du Maurier’ but I’m even more keen to read ‘Manderley Forever: The Life of Daphne du Maurier’ by Tatiana de Rosnay (2017) because that is new to me.  I have a sample on my Kindle and the tone is quite different to normal biography, reading almost as a novel.  In some ways that sample extract reminded me of the tone of Myself When Young.  I think I’m talking myself into it – another du Maurier book!

26 thoughts on “Myself When Young by Daphne du Maurier”