The debate could have gone on for much longer; there are as many versions of Daphne’s relationship with Cornwall as there are people with a story to tell.

When Ali first posted about her plans to run a Daphne du Maurier Reading Week, she mentioned that she shares her birthday with Daphne – 13th May – and also that the Fowey Festival is always timed to include that date.  Started in 1997, the festival was originally named after Daphne.  It is now called the Fowey Festival of Arts and Literature and has broadened in content although du Maurier and her work continue to be a primary focus.  It seems fitting that I end my series of Daphne posts with an account of my festival experience this year, limited though it was.

I was very excited when the programme was announced; I declared it to be the best since we had moved here.  As usual, I worked through the programme carefully, flagging events and sessions that seemed irresistible.  Wisely, as it turned out, I didn’t buy tickets in advance.  I whittled down my long wish list to what seemed manageable.  How eagerly I anticipated the week to come.  And for one reason after another the days passed.  The list shrunk as the week shortened.  I wondered if I would get there at all.  I did make it, but only just.

I had thought I’d mention here the various events that I had planned to attend and didn’t, but as I’ve been writing about them it feels like I’m missing them all over again!  So we’ll gloss over Diane Setterfield and Ruth Ware and Patrick Gale and all the many Du Maurier sessions that I didn’t get to (all for very good and positive reasons) and move straight to the one session that I attended, which fittingly happened to be the very final event of the festival.

This discussion was between Ella Westland (whose book, Reading Daphne, I had just read) and Bert Biscoe, himself an author and poet, but also a passionate Cornishman and local politician, and the subject was stimulated by Daphne’s final novel, Rule Britannia. 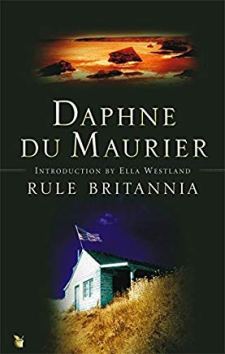 There has been plenty of debate about the relevance of this novel at this time, as we teeter on the edge of Brexit.  It must have seemed a bizarre concept when it was published in 1972.  Having left the Common Market, Britain forms an alliance with the United States of America without the knowledge of the British populace.  When US naval ships anchor in St Austell Bay, Cornwall rises in rebellion.  I haven’t read this one yet though I’m very keen to do so and even more keen to read Ella Westland’s introduction to my Virago copy, which I’ve flicked through and which seems crammed with fascinating details about Daphne’s later life.  This one is another departure from the wide range of genres Daphne had already written in.  It is – I am led to believe – more light-hearted and clearly quirky.  Westland, in the opening page of her introduction, describes it as ‘shifting from the funny and farcical to the bleak and bizarre’.

The session, however, was intended to focus significantly on Daphne’s relationship to Cornwall and the Cornish people.  The book was discussed – and inevitably, the current political situation couldn’t be avoided; there was plenty of good-natured disagreement.  But there was also plenty about Daphne herself – with yet more good-natured disagreement.  It was suggested that Daphne didn’t really engage with the local people or local issues and that Cornish characters in her books were perhaps caricatures.  Ella cited a Welsh character in Rule Britannia whom Daphne named Taffy – surely a caricature of a Welshman was the suggestion.  A sprightly member of the audience took the mic:  she had known Daphne personally and found her to be unfailingly kind and interested, and was Ella aware of the actual Welshman who had lived until his death in Polruan – whose name was Taffy?

Ella also talked about when she herself had first arrived in Cornwall in the late eighties and ideas were first being discussed about creating a du Maurier festival.  Ella found then that local people were very reluctant – claiming that ‘she (Daphne) wasn’t Cornish’.  Contrast this experience with the poignant introduction to her review of The Scapegoat, written by Jane at Beyond Eden Rock, herself a native Cornishwoman.

The debate could have gone on for much longer; there are as many versions of Daphne’s relationship with Cornwall as there are people with a story to tell.  I was sorry when time was called.  It was lively and stimulating and left me knowing that I should have got to more events.  But one is better than none and there’s always next year.

And so it was time for home.

Past the glorious ‘Rook with a Book’ created by father and son Gary and Thomas Thrussell and unveiled by Daphne’s son Kits Browning last year. 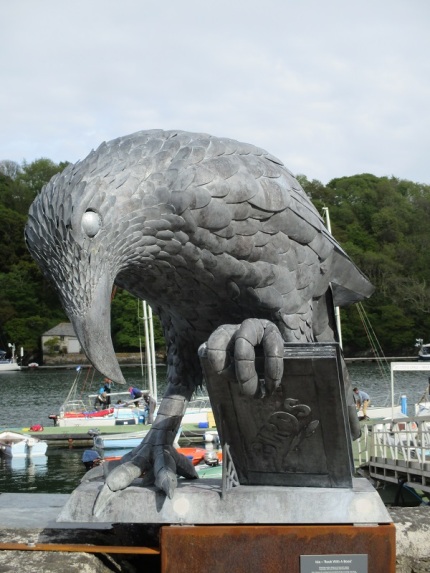 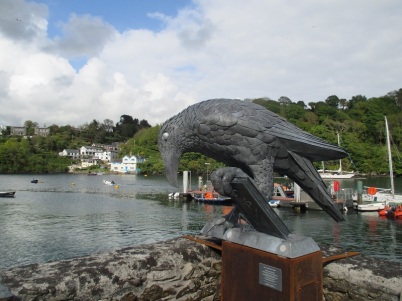 “When I was first approached, I was told that it was a crow so I spent a lot of time doing research on crows, in order to have a speech to tell you all but I was then told two weeks ago it isn’t a crow – it’s a rook.

“So you will be delighted to hear, I’ve torn up the research and I will be as brief as I can.”

Mr Browning said during research, he discovered that the collective noun for crow was a ‘murder’ of crows, which he said “was rather sinister – although it might have appealed to mum”.

(Kits Browning, from an article in Cornwall Live, March 2018)

Back through Fowey, back on the ferry, looking out at Ferryside and the Jane Slade figurehead outside what was once Daphne’s bedroom. 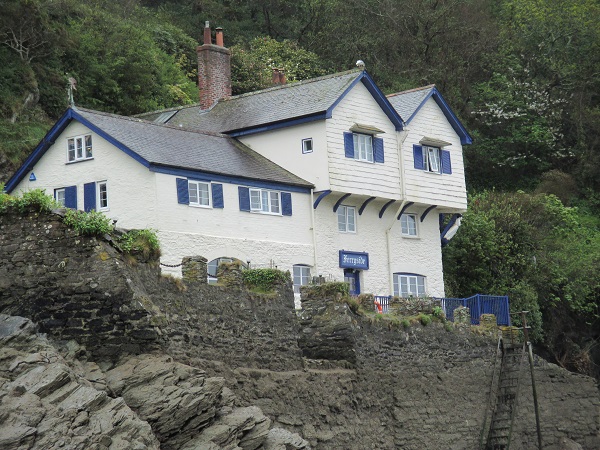 And here on the blog, time at last, to move on.  Though I might just have to read Rule Britannia.  And one of the sessions that I missed – on The House on the Strand and The Parasites – reminded me that each have anniversaries this year (fifty and seventy years respectively) which provides strong justification to pull both off the shelves.  It’s very tempting.  Fortunately Ali has generously said that she will run the reading week again next year so perhaps I should wait until then! 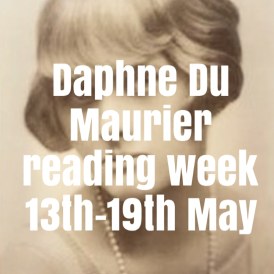