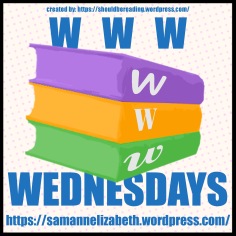 WWW Wednesday is currently hosted by Sam at Taking on a World of Words.  Each week there are three questions:

This seems to be working well for me.  Even if I’ve not been able to post anything else, having one weekly post to produce has been manageable.

A month of disappointing September weather has departed, making way for some disappointing October weather (so far) and  leaving me with a streaming and debilitating cold.  Not what I would choose as an ideal start to autumn!  But there are always books.

What are you currently reading? As the new month began it seemed prudent to begin some reading for the 1930 club.  There are so many great choices from 1930; I blame the head cold for making it impossible to decide what to read.  I finally decided on The Edwardians by Vita Sackville-West and then felt so rotten that it seemed beyond my abilites to begin, so I turned to E M Delafield’s delightful Diary of a Provincial Lady for comfort – also published in 1930.  And now I’m reading both of them!  The Diary is the perfect tonic while I’m feeling so below par and seems surprisingly current considering it was written almost 90 years ago.  Many of the Provincial Lady’s witty observations still hold good and I’m loving the references to the best sellers of the day.  The Edwardians may have been written in 1930 but opens in 1905 and is loosely based on Vita’s experiences of life at Knowle, her family’s ancestral home, and the changes in society over the early decades of the last century.  Sadly, this book hasn’t yet been mentioned by the Provincial Lady; it will be very peculiar if it is!  Both these books were highly popular in their own right on publication and are probably the best known works by Delafield and Sackville-West.  I’m enjoying them both though it’s still early days.

What did you recently finish reading? I recently finished Over Sea, Under Stone by Susan Cooper.  This is the first in a quartet of children’s fantasy classics known as The Dark is Rising.  I knew it was based in Cornwall but was particularly pleased to find that it is set in my corner of the Duchy, a little distance along the coast in Mevagissey, renamed Trewissick in the book.  The story wasn’t quite what I expected: more of a children’s mystery-adventure story than a fantasy.  But it has set the scene for what is to come and I immediately picked up the second in the series from which the full quartet gets its name.  A glance at the contents page and confirmation from Helen at She Reads Novels has meant I’ve put it down again because The Dark is Rising takes place at Christmas, so I shall save it until December.  Plenty more to read in the meantime!

What do you think you’ll read next? Although I haven’t officially signed up for RIP XIV, I’m reading various suitably spooky, gothic and crime books which will come under its brief and no doubt I’ll be reading more in that vein as the month progresses.  I also have the first in another series of classic children’s fantasy novels – Cart and Cwidder by Diana Wynne Jones which is the collective read for Witch Week beginning on October 31st and can be found here co-hosted by Chris at Calmgrove and Lizzie Ross at Lizzie Ross Writer.  Another that I shall pick up soon will be R L Stevenson’s The Strange Case of Dr Jekyll and Mr Hyde which is my spin book for the Classics Club.  Another of those occasions when the story is so well-known that I feel I must have read the book itself despite knowing that I haven’t.  I’m looking forward to finally reading the original – a book which is as deeply ingrained in the psyche as Dicken’s Christmas Carol – which will also be on the menu for December.