My own mind is not sound; I am the last person entitled to laugh at this unfortunate, deranged woman. But perhaps that is why I hate her so much. I see in her the damage a maid can do to her mistress. I see elements of myself.

My wish list is strewn with books written in recent years which fall into the historic/gothic genre, none of which I have so far managed to start.  I want to; it just hasn’t happened.  Bone China by Laura Purcell has finally got me over the starting line, courtesy of The Pigeonhole.  This is my first book by Laura Purcell and hopefully it’s clear that I’m not well-versed in the work of modern gothic writers in general so what follows should be read with those caveats in mind.  It’s also not easy to describe this book whilst avoiding spoilers but I can say with conviction that I loved it!  An excellent choice to kick off my RIP XIV reads. 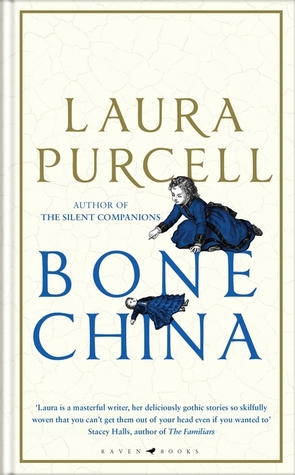 Formerly known as Esther Stevens, Hester Why is on her way to a new position in an isolated house on the Cornish coast.  She wishes to disappear.  But there is an accident as the coach pulls into Exeter and she is forced to reveal her nursing background in her attempts to save a man’s life.  By the time she reaches her remote destination there are more questions raised than answered.

There are several story lines beyond Hester’s.  Her own past is slowly revealed, as is the past of the lady she is now employed to care for, Miss Louise Pinecroft.  Miss Pinecroft is very weak and almost mute thanks to a stroke some years ago.  Her household includes her ward, Rosewyn, watched over by Creeda who has worked at the house since Louise first arrived with her father forty years before.  Rosewyn is a child-adult.  She carries a doll and wears her clothes inside out and Creeda runs a line of salt across the doorway to Rosewyn’s room – all to protect her from being “taken” as Creeda once was herself.  Miss Pinecroft herself rarely leaves the china room.  When she can be persuaded to sleep in her own bed she is locked in – a lock which records each entry and exit…

Integral to the various storylines is an insight into medical treatments and prevailing beliefs at the time.  I was fascinated and repelled in equal measure by the medical and historical facts presented, which appear now as barbaric to our modern sensitivities but serve to anchor the book in time and place.  The Cornish setting felt authentic, if extreme: bitterly cold and stark and a startling contrast to Hester’s previous life in London.  And interwoven throughout is the folklore and superstition local to Morvoren House.

The beach wore a different aspect that morning. Louise felt she was seeing it for the first time. The grey rocks, hazed with moss and the droppings of birds, were ancient, unyielding as death. How arrogant it was for a mortal to strive against nature’s order. How utterly hopeless. The sick would die; the tide would come in.

The writing is gripping; the atmosphere is eerily tense, emphasised through Hester’s voice, the bleak desolation of a Cornish winter and the flipping back and forth through events past and present.  Hester revealed just enough of her character and her past to have me questioning her reliability as a narrator, but despite what she felt about herself and despite her behaviour, I never disliked her and for the most part felt only sympathy for her.  I found her well-rounded and plausible.  There were clear reasons for her actions and her beliefs.  The remaining characters felt less solid and certainly less reliable but that was no bad thing.  I had no idea if there was anyone who could be trusted!

Throughout the story I was constantly second-guessing – revising my thoughts about who did what, what was true, who to believe, and how the pieces – and the people – truly fitted together.  And the story seemed structured so that every guess I made seemed just that little bit more sinister than the one before.   The end, when it came, was totally not what I expected and yet totally in keeping.  Over the final few pages I began to realise what might happen and read with bated breath not daring to believe it until the very last sentence.  For me at least, the ending felt right, though not from what I have read, for everyone.

Laura Purcell has written two previous gothic novels, both of which I would love to try.  And there’s still the list of other recently-written gothic tales waiting their turn.  I think now that I’ve read this one, it won’t be long before I start to tackle that list.

My thanks to Laura and to The Pigeonhole for making this book available to me.