The choice is limited for my parallel series of posts: An A – Z of those I own.  I really don’t have that many books sitting unread on the shelves so there’s not that many to choose between for each letter.  The choice for An A – Z of those I don’t own but would like to read is a little more daunting.  There is a such a thing as too much choice.  But here we go…

A beautiful, stunningly ambitious novel about a blind French girl and a German boy whose paths collide in occupied France as both try to survive the devastation of World War II

It would have been hard not to stumble across this book: winner of the Pulitzer in 2015.  I knew of it before it won the prize and it’s remained just off my radar ever since.  I don’t know why really; everything suggests this is a book I will love.  It’s now on order from the library.  There’s a short queue which suits me nicely.  A book I’d like to read around Remembrance Day.

In a village at the edge of the wilderness of northern Russia, where the winds blow cold and the snow falls many months of the year, an elderly servant tells stories of sorcery, folklore and the Winter King to the children of the family, tales of old magic frowned upon by the church.

Helen at She Reads Novels pulled me into this one with her enticing review.  A gorgeous cover; myth, magic and folklore in the snow-clad forests of 14th century Russia: I immediately thought of how much I loved Eowyn Ivey’s books.  “A stunning, magical fairy tale for adults”, I read elsewhere.  But I also notice that the book is described by some as fantasy.  I don’t see myself as a keen reader of fantasy – which is a view entirely at odds with how much I loved The Snow Child, and – in the distant past – all of Tolkien’s works. It amuses me when I think of the various categories I unwittingly place myself into.  Helen describes The Bear and the Nightingale as historical fantasy – that I can relate to.  This book intrigues me.  I think I would like it very much.

B might be for The Birdwatcher by William Shaw (2016)

WHAT DRIVES GOOD MEN TO MURDER?
‘If you’re not a fan yet, why not?’ Val McDermid
‘The most gripping book I’ve read in years. William Shaw is, quite simply, an outstanding storyteller’ Peter May
‘Grips the reader by the throat and never lets go’ Independent

This one leapt out at me when I read a review by Fictionophile.  It’s crime fiction: not a genre that I read at all and certainly not one I would expect to leap out at me.  But this policeman is a birdwatcher: I love birds.  And he lives in Dungeness: I am drawn to places such as Dungeness.  Dungeness is on the Kent coast: a bleak, desolate beach known for its nuclear power station and its bird reserve.  I’ve been there once, years ago.  I want to go back.

The tagline for The Bear and the Nightingale reads: “Beware the evil in the woods…”

The opening lines of The Birdwatcher (courtesy of Lynne at Fictionophile) read: “There were two reasons why William South did not want to be on the murder team. The first was that it was October. The migrating birds had begun arriving on the coast.  The second was that …”   (There’s a very good and rather alarming second reason!)

So: clear reasons in my mind at least, for reading either of these books in October – as the evenings draw in, the birds descend, and the witches and beasties emerge from the shadows….

But which will it be?

The Bear and the Nightingale

The prosaic reason is that it’s available in my local library.  I’ve reserved it and can collect it straight away.

The other reason is that quite independently of considering this post, I have been looking at visiting Dungeness.  I’ve long wanted to spend a few days there – in the quiet of the autumn or the winter, soaking up the atmosphere as well as watching the flocks over-wintering on the reserve.  It would be perfect to read The Birdwatcher while I was there and that isn’t going to happen this month.  I’m keeping this one back and hoping I can make this happen before next spring. 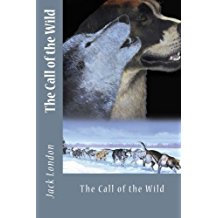 The Call of the Wild is a novel by American writer Jack London. The plot concerns a previously domesticated and even somewhat pampered dog named Buck, whose primordial instincts return after a series of events finds him serving as a sled dog in the treacherous, frigid Yukon during the days of the 19th century Klondike Gold Rushes. … Because the protagonist is a dog, it is sometimes classified as a juvenile novel, suitable for children, but it is dark in tone and contains numerous scenes of cruelty and violence.

Again, we have snow and darkness and atmosphere.  But there are other reasons for choosing this book.  It’s from my Classic Club list.  And the simple reason that it is on that list is because it was my father’s favourite book as a boy.  Who knows how old I was when he told me that.  Young, certainly, because at the time I was repelled by the notion of a book about a dog struggling for survival in the frozen wastes.  I couldn’t imagine ever wanting to read this book.  Now it seems I can’t get enough of those same frozen wastes, in books at least.  But also – imperceptibly – it’s become important to read Dad’s favourite boyhood book now.  I want to be able to discuss it with him.

(I’m buying him a lovely copy for his birthday, or maybe Christmas.  Don’t tell him.)

Finally…. I am genuinely astonished to realise that the animal theme which unwittingly unfolded in the A – Z of those I own has continued into the A – Z of those I don’t.  We had cats and horses in the first selection; now I’m adding bears, birds and dogs.  I’ll have a zoo soon!  Which reminds me: I must get around to reading some George Durrell.  Or maybe Dr Dolittle!